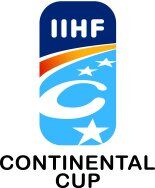 The Continental Cup is an ice hockey tournament for European clubs, begun in 1997 after the discontinuing of the European Cup. It was intended for teams from countries without representatives in the European Hockey League, with participating teams chosen by the countries' respective ice hockey associations.

In the 2000-01 season, with the European Hockey League on hiatus, the Continental Cup became the de facto European club championship. The format remained the same, with 36 teams from 27 countries.

With the beginning of the IIHF European Champions Cup from 2004–05, participants included national champions of countries not in the Super Six (the top six European nations according to the IIHF World Ranking) as well as teams from Super Six leagues, which included HC Dynamo Moscow and HKm Zvolen.

The Federation Cup was an official European ice hockey club competition created in 1995. It was the second European competition for club teams, intended for those teams who couldn't qualified for the IIHF European Cup, especially for those from eastern European countries. It was the direct predecessor of the Continental Cup, which was played two seasons later.

In the first year of competition, 13 Eastern European teams from twelve countries participated in the tournament. In a KO-system with three qualifying groups, which qualifies the four participants in the finals.

The following year was played in the same mode. Due to the increased number of participants (some Western European clubs had registered for the competition), an additional qualifying round was introduced.