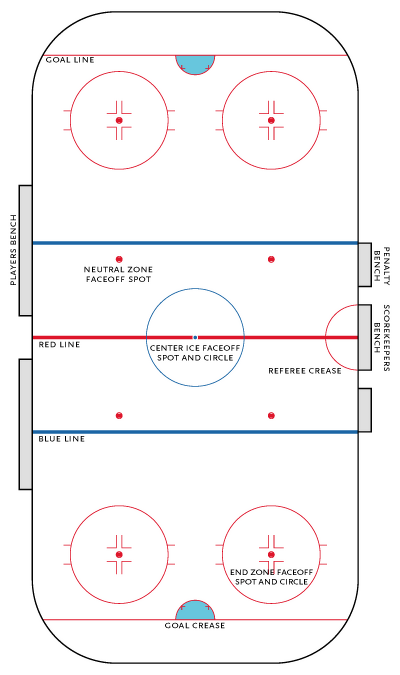 A hockey rink is an ice rink specifically designed for the game of ice hockey. It is rectangular with rounded corners and surrounded by a wall approximately 40 inches (1 meter) high called the boards.

There are two standard sizes for hockey rinks: one used primarily in North America, and another used in the rest of the world.

The center line divides the ice in half lengthwise. It is used to judge icing, meaning that if a team sends the puck across the center line (red line), blue line and then across the goal line (that is to say, shoots or dumps the puck past the goal line from behind their own side of the center line) it is said to be icing. It is a thick line, and in the NHL must "contain regular interval markings of a uniform distinctive design, which will readily distinguish it from the two blue lines." When discussing differences in the rules of the game, it is often said that a game is played with no red line. This simply means that there is no two-line pass violation. The center line is still used to judge icing violations.

There are two thick blue lines that divide the rink into three parts, called zones. These two lines are used to judge if a player is offside. If an attacking player crosses the line into the other team's zone prior to the puck crossing, he/she is said to be offside.

Near each end of the rink, there is a thin red goal line spanning the width of the ice. It is used to judge goals and icing calls.

There are 9 faceoff spots on a hockey rink. Most faceoffs take place at these spots. There are two spots in each end zone, two at each end of the neutral zone, and one in the center of the rink.

The center faceoff spot is typically blue. The center circle may be red or blue. Usually all other faceoff spots and circles are red. The white areas of the dots are where your stick must remain during a faceoff.

At each end of the ice, there is a goal consisting of a metal goal frame and cloth net in which each team must place the puck to earn points, or goals. The opening of the goal, which sits on the goal line, is 6 feet wide by 4 feet high (1.83 × 1.22 m). The tubes extending vertically from the goal line are called the goal posts, and the tube that connects these at the top of the goal frame is called the crossbar.

The goal frame is moored to the ice with flexible pegs, which are designed to allow the net to move freely if a player crashes into the goal. At many multipurpose rinks, metal pins are used that only protrude about a quarter of an inch (a centimeter) into the ice, as the flexible pegs require large holes that cannot be repaired by an ice resurfacer drilled into the ice.

In front of each goal, there is a goal crease, which is surrounded by thin red lines and filled in with light blue. The crease is a special area of the ice designed to allow the goaltender to perform his or her duties without interference. In most leagues, no attacking player may enter the goal crease with a stick, skate, or any body part before the puck. For the purposes of this rule, the crease extends vertically from the painted lines to the top of the goal frame. This rule was eliminated from the National Hockey League and other North American professional leagues beginning in the 1999-2000 season.

In amateur and international hockey, the goal crease is a half circle with radius of 6 ft (1.8 m). In the NHL and North American professional leagues, this goal crease is truncated by straight lines extending from the goal line 1 ft (30.5 cm) outside each goal post.

During the 2004-05 AHL season, an experimental rule was implemented for the first seven weeks of the season. This additional area behind the goal line is officially referred to as the Goaltender Trap Zone, but is more frequently called the trapezoid in reference to its shape. The area consists of a centered, symmetrical trapezoid. The bases of the trapezoid are formed by the goal line and the end boards. The base on the goal line measures 18 feet and the base on the end boards measures 28 feet. It is prohibited for the goaltender to handle the puck anywhere behind the goal line that is not within the trapezoidal area. If he does so he is assessed a minor penalty for delay of game. The motivation for the introduction of the trapezoid was to promote game flow and prolonged offensive attacks by making it more difficult for the goaltender to possess and clear the puck.

The seven-week experiment proved so successful that the AHL moved to enforce the rule for the rest of the season, and then was approved by the NHL when play resumed for the 2005-06 season following the previous lockout. The ECHL, the only other developmental league in the Professional Hockey Players Association (along with the AHL) also approved the rule for 2005-06.

The zone has been reffered to as different names. The Trapezoid is the most common, but former Chicago Wolves broadcaster coined the term "Forbidden Zone" possibly taking a line from the film Strange Brew. 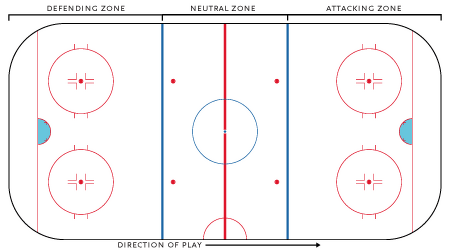 There are five to seven benches outside a hockey rink: two players benches where the players and coaches of each team sit during the game, two penalty benches where penalized players serve their time, and a scorekeepers bench where most of the off-ice officials sit. Often, there is also a goal judge bench behind each goal where the goal judge sits.

In many rinks, the height of the boards is extended with glass or plexiglas to prevent pucks from leaving the playing surface and injuring spectators. Often, there is netting above the glass for further protection. Pucks that deflect off the glass and remain inside the rink are still in play, whereas pucks that hit the netting are considered out of play.