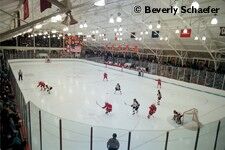 Hobey Baker Rink is home to the Princeton Tigers men's and women's varsity teams. Baker Rink was built in 1921, making it one of the oldest arenas still in use in Division I hockey, and seats 2,100 fans. The dimensions of the playing surface are 200'x85'.

Baker Rink is named for Hobart A.H. "Hobey" Baker '14, a multi-sport athlete at Princeton. Baker was a star for the Princeton football team, but excelled most at hockey; in his day he was considered to be the finest amateur hockey player ever to develop in North America. Baker served his country as a fighter pilot during World War I, and was killed while testing a repaired plane. In addition to being memorialized by Baker Rink, the Hobey Baker Memorial Award is annualy bestowed upon Division I men's hockey's most outstanding player.

Retrieved from "https://icehockey.fandom.com/wiki/Hobey_Baker_Rink?oldid=5374"
Community content is available under CC-BY-SA unless otherwise noted.