The Henderson Silver Knights are a professional ice hockey team based in Henderson, Nevada, that began play in the 2020–21 American Hockey League (AHL) season. The team currently plays home games at Orleans Arena in nearby Paradise, Nevada, with plans to relocate to Henderson in 2022. The team is an owned-and-operated affiliate of the Vegas Golden Knights.

Prior to relocation to Nevada

The San Antonio Rampage were an ice hockey team in the American Hockey League based in San Antonio, Texas. They are currently the top affiliate of the St. Louis Blues of the National Hockey League (NHL). The Rampage were owned by Spurs Sports & Entertainment before they agreed to sell the franchise to the Vegas Golden Knights in February 2020, pending league approval. The Golden Knights have applied to relocate the franchise to the Las Vegas suburb of Henderson, Nevada, at the conclusion of the 2019–20 AHL season and become the club's top affiliate.

On February 6, 2020, the Vegas Golden Knights announced it had purchased the franchise from the Spurs with the intent to relocate it to Henderson, Nevada. The purchase and relocation are pending league approval.[1] A few days later the team clarified the arena situation. The team will be based out of the Orleans Arena pending completion of the 6,000 seat Dollar Loan Center in Henderson, Nevada which will be built separate of the Lifeguard Arena which will become the practice facility for the NHL team replacing the City National Arena in Summerlin, Nevada as their training facility.[2]

The team was announced as using the Orleans Arena for at least the 2020-21 season pending completion of the new facility in Henderson.[3]

Reports quickly surfaced that the team could possibly be named the Vegas Silver Knights.[4]

The name would be announced on May 28, 2020 as being the Henderson Silver Knights.[5]

In 2000, construction began on the SBC Center, located next to the Freeman Coliseum, home of the Central Hockey League's San Antonio Iguanas. Partnering with the Florida Panthers, the Spurs bought the dormant Adirondack Red Wings franchise and moved it to San Antonio.[6] Local investment for the Iguanas quickly dried up, and the CHL franchise folded.

Originally, the team was nicknamed the San Antonio Stampede. However, when a local semipro football team objected, the name was changed to the Rampage.[7]

On June 30, 2005 Spurs Sports & Entertainment purchased the Panthers' interest in the franchise, assuming sole ownership of the AHL club. They also entered a multi-year affiliation agreement with the Phoenix Coyotes.[8]

On September 7, 2006 The Rampage unveiled their new uniforms with the official colors now being black, white and silver (the same motif used by the Spurs, as well as other Spurs-owned teams). While the primary and secondary logos remain the same, the crest of the jerseys now displayed just the bull's head, giving it a sleeker look.

On 11 April 2007, the Coyotes announced that they had fired Rampage general manager Laurence Gilman, who had been with the Coyotes organization for 13 years. [1]

On November 23, 2009, the Phoenix Coyotes fired Greg Ireland. He was replaced by assistant coach Ray Edwards; Mike Pelino was named assistant coach. Ray Edwards was officially named head coach of the San Antonio Rampage prior to the 2010–11 season.

Their main rivals are the Texas Stars (located near Austin) and, from 2002 to 2013, the Houston Aeros.

After the 2010–11 AHL season, the Coyotes came to an agreement with the Portland Pirates to be their new AHL affiliate, leaving San Antonio without an affiliate.[9] On June 29, 2011, San Antonio officially became Florida's top affiliate for a second time.[10]

In the 2011–12 season, the Rampage finished with a record of 41–30–3–2, good for 87 points to qualify for the sixth playoff seed in the Western Conference. They faced the third-seeded Chicago Wolves in the first round, taking Game 1 and Game 2 at home to take a 2–0 series lead in the best-of-five series. They then lost to the Wolves in Games 3 and 4 in Chicago, leading to a Game 5. In Game 5, the Rampage took a 2–0 lead, but the Wolves rallied to tie the game, sending it into overtime. After 25 minutes of overtime, San Antonio winger Bill Thomas passed to center Jon Matsumoto, feeding defenceman Roman Derlyuk to score the series winning goal on his belly to secure the first series win in franchise history for the Rampage. The goal is known to many fans as the Goal Heard Round the Alamo, and is considered the most important in Rampage history.

On March 18, 2015, the Florida Panthers announced they had entered into an affiliation agreement with the Portland Pirates to begin in the 2015–16 season, thus ending the Panthers' second term as San Antonio's NHL affiliate.[11] On April 17, 2015, it was announced that the Rampage had come to a five-year affiliation agreement with the Colorado Avalanche.[12]

During the 2017 off-season, it was reported that the Avalanche would promote its ECHL affiliate, the Colorado Eagles, to the AHL in 2018 while the Rampage would officially affiliate with the St. Louis Blues beginning with the 2018–19 AHL season.[13][14] For the 2017–18 season, as the Blues did not have an official AHL affiliate after the Vegas Golden Knights partnered with their former affiliate, both the Avalanche and Blues would send AHL prospects to the Rampage.[15]

The San Antonio market was previously served by: 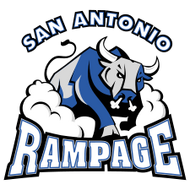 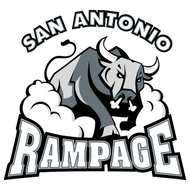