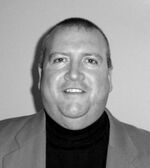 For twenty years, Heavy Evason was involved in coaching, managing and scouting in junior and professional hockey. He began with Brandon Wheat Kings and Portage Terriers, then moving to Niagara Falls Thunder and back west when he coached Neepawa Natives. From 1993-95, Evason coached Peterborough Pirates in England and then returned to Manitoba to go behind the bench with South East Blades. From 1999 until 2004 he scouted for the Kamloops Blazers of the WHL. From 2000 to 2002, he also served as director of hockey operations for the Flin Flon Bombers and as executive director of the Royal Bank Cup. He received two posthumous awards, the Jim Thomson Award from Special Olympics and the Paul Harris Fellow Medal from Rotary International.