Ice Hockey Wiki
Register
Don't have an account?
Sign In
Advertisement
in: Born in 1914, Dead in 1986, Canada's Sports Hall of Fame inductees,
and 18 more

Drillon played only seven seasons in the NHL, six of those with Toronto and one with the Montreal Canadiens. A left-winger noted for his deadly accurate shot, he created a specific style of play that made him a leading scorer. Drillon's strong frame made it difficult for opposing defencemen to clear him from the front of the net. Drillon was able to securely park himself in front of the opposing netminder to re-direct shots or pick up rebounds. This style of play would earn him a league scoring title in 1937–38 (the last one by a Toronto Maple Leaf). Future stars such as Phil Esposito, Dino Ciccarelli and Dave Andreychuk emulated his innovative style with great success.

Traded to the Montreal Canadiens for the 1943 season he finished second on the team in goals scored. At season's end, Drillon cut short his brilliant hockey career and joined the Royal Canadian Air Force, serving for the remainder of World War II. After the war, he worked as a hockey coach and returned to his native New Brunswick where he was employed as a scout for the Maple Leafs, covering the Maritime Provinces. He eventually accepted a job with the New Brunswick civil service. In 1975, he was inducted into the Hockey Hall of Fame.

Gordie Drillon died in Saint John, New Brunswick in 1986 and was interred there in the Ocean View Memorial Gardens cemetery. 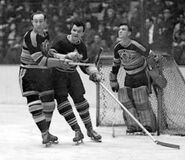