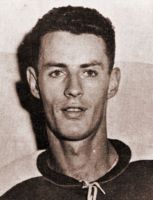 Born in Winnipeg, played for the Winnipeg Canadiens of the MJHL in 47 & 48. Played last junior season with the Barrie Flyers, winning league championship. Turned pro with AHL Buffalo in 49-50 and played seven seasons with the Bisons. One of nine Manitoba players to appear in the first AHL All-Star game on October 27, 1954. Began coaching career in 1959 with the MJHL Winnipeg Rangers and in 1961 led club to the Western Canada final and the Charlie Gardiner Memorial Trophy in 1967. Coached the WHL Winnipeg Clubs in 1973-74 and another seven seasons in Winnipeg minor system before retiring in 1982.

Retrieved from "https://icehockey.fandom.com/wiki/Gord_Pennell?oldid=621019"
Community content is available under CC-BY-SA unless otherwise noted.