Ice Hockey Wiki
Register
Don't have an account?
Sign In
Advertisement
in: Born in 1945, Dead in 2005, Boston Bruins players,
and 12 more

Born in Montreal, Marotte played junior hockey for the Victoriaville Bruins in Quebec before joining the Niagara Falls Flyers of the Ontario Hockey Association in 1963. He was a first-team all-star on the Flyers team that won the 1965 Memorial Cup. Both of his junior teams were affiliated with the Boston Bruins, and Marotte began his NHL career with the Bruins in 1965. In May 1967, he was part of one of the biggest trades in Bruins history as one of three players sent to Chicago in the deal where Boston acquired Phil Esposito.

Marotte spent most of the next three seasons with the Black Hawks before being traded to the Los Angeles Kings in February 1970. While with the Kings in January 1971, Marotte broke rookie Darryl Sittler's wrist with a cross-check, giving him the most serious injury of his career. Marotte represented the Kings at the 1973 National Hockey League All-Star Game and scored a career-high 45 points that year. The next season, he was sent to the New York Rangers in the trade where the Kings acquired their future captain and coach, Mike Murphy. Marotte played in New York for three years. At the beginning of the 1976–77 season, Marotte was claimed on waivers by the St. Louis Blues, and spent time in the minor leagues for the only time in his career, playing for the Kansas City Blues in the Central Hockey League. The next season, Marotte jumped to the World Hockey Association to join the Cincinnati Stingers. He was traded mid-season to the Indianapolis Racers and finished his career there in 1978, retiring at the age of 33. Over his 13 seasons as a professional,

Marotte died of pancreatic cancer in 2005. 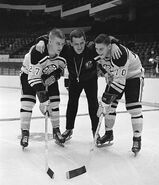