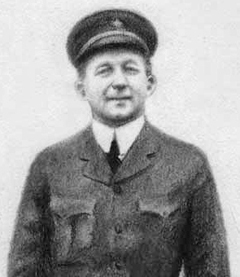 George V. Brown (21 October 1880 – 17 October 1937) of Hopkinton, Massachusetts championed the development of various sports and sporting events in the United States, most notably the Boston Marathon and amateur ice hockey.

From 1904 to 1936, Brown served the United States Olympic Team as a manager, official, and coach. In 1919, he became general manager of the Boston Arena, home to indoor track meets, boxing matches, and hockey games, among other events. Later, he continued in that role at the Boston Garden until his son Walter A. Brown took over upon George’s death at age 57.

During Brown’s youth, hockey was in its infancy in the United States. In 1910, Brown formed and managed an amateur ice hockey team for the BAA, which played at the newly constructed Boston Arena.

Over the next two decades, Brown organized hockey events held at the Arena, including Canadian-American games and collegiate competitions. When the Arena burnt down in 1918, Brown persuaded its owner, Henry Lapham, to rebuild. Brown was then named general manager and promoted hockey as its major draw. In 1934, Lapham purchased the rival Garden, and named Brown as its general manager and vice president. When professional hockey was first introduced and its teams sought to play at Boston’s rinks, Brown opposed, favoring amateur competition. He later accepted the professionals and promoted the Boston Bruins playing at the Boston Garden.

Brown served as Athletic Director at Boston University (BU) and in 1917, was instrumental in the creation of the school’s first hockey team. The BU hockey team’s annual Most Valuable Player award is named the George V. Brown Memorial Award, in his honor.

In the 1924 Olympics, Brown organized the US Olympic Hockey team, with 7 of the 10 members coming from the BAA team. The team earned a silver medal.

In addition to organizing the 1924 US Olympic Hockey team, Brown was a manager or US Olympic committee member from 1908 to 1920. He was the assistant track and field coach for the US men’s team in 1924, 1928, and 1936. For the 1932 games in Los Angeles, Brown served as an official. In January 1938, the United States Olympic Committee marked his death with a moment of silence.

The Starter, sculpture of George V. Brown. Retrieved on 2009.

Retrieved from "https://icehockey.fandom.com/wiki/George_V._Brown?oldid=173314"
Community content is available under CC-BY-SA unless otherwise noted.