Ice Hockey Wiki
Register
Don't have an account?
Sign In
Advertisement
in: Born in 1900, Dead in 1974, Boston Bruins players,
and 9 more

Redding once filled in as the Bruins goaltender when regular netminder Hec Fowler was injured during a game against the Toronto St. Pats. He would allow 1 goal in just over 10 minutes of play to give him a career GAA of 5.45. Redding would only play 35 career NHL games at his regular defence position, scoring 3 goals and 2 assists in the 1924-25 and 1925-26. 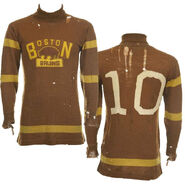