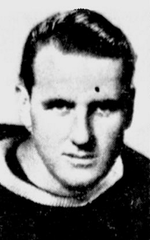 Brown began his pro career with the Montreal Canadiens in the 1936–37 NHL season playing 27 games (4–6–10) during the regular season then four playoff games in which he went pointless. The following season, he split his time between Montreal and the IAHL New Haven Eagles. That season he was again held pointless during the playoffs. He played his final season with Montreal before going back to the IAHL for the rest of his pro career where he played for the Eagles again followed by the Springfield Indians and the Hershey Bears.

In 1940-41 he played for the St Jerome intermediate team in the 1940-41 Quebec Senior Playoffs. He then played two seasons for the Montreal Canadiens (Senior) team and retired in 1943.

All of George Brown’s teammates knew that he was an exceptional athlete, blessed with extraordinary strength and endurance. When team captain Albert Seibert saw Brown skating hard some 30 minutes after the other players had left the ice following the morning skate, he said to Brown jokingly: “You’ve got so much energy, George! You could run to Florida!” George immediately laughed, but the idea stuck with him.

Six days before the start of the regular season, no one had heard from George. His teammates tried to contact him, but failed. It was then that head coach Cecil Hart entered the dressing room with a piece of paper in hand. It was a note written by Brown indicating that he had just left Montreal with his equipment bag on his shoulder trying to make it to Madison Square Garden for the first game of the regular season against the Rangers. Stunned by the outlandish situation, Hart sent his good friend Toe Blake on the road hoping that he would find Brown before he reached U.S. customs. Unfortunately for him, Brown had elected to go a different route, traveling through the woods and literally creating his own path, navigating in between the Adirondack mountains.

Cecil Hart was furious and he still couldn’t understand what possessed George Brown to head out on an expedition a few days before the season-opener. For his part, Toe Blake spent four days looking for Brown in the Northeastern United States. A few hours before abandoning the search, Blake had an idea to resolve the situation. He would contact all of the Amerindian tribes in the area to see if they could help find Brown. The strategy, however, never materialized. As if nothing had transpired, George Brown, proud by nature, journeyed the 595 km distance between the Montreal Forum and New York’s Madison Square Garden. During his trek, he likely fed off wild animals and small fruit, which would have been easy for an athlete who was also a scoutmaster during the off-season. Interestingly enough, his totem was « Lost Weasel ».

On October 2, 1937, the tilt between the Canadiens and Rangers was about to get underway, but Brown was still nowhere to be found. With the Rangers up 3-1 in the second period, a man appeared behind Cecil Hart. Out of nowhere, George Brown, visibly dirty and banged-up from his six-day journey, joined his teammates on the bench dressed in the equipment he had carried with him throughout the trip. His teammates were shocked to see him. Despite his fatigue, George Brown accomplished the impossible, registering a hat-trick en route to leading the Canadiens to their first victory of the 1937-1938 season. After the up-and-down game, Hart made a historic statement: “Ladies and gentlemen, this story is completely false. It was an April Fools' joke!”