Born in Ottawa, Ontario, Buck was one of five brothers. His brothers Frank, Joe, Bobby and Billy all played in the NHL.

Boucher started his professional athletic career in football as halfback for the Ottawa Rough Riders of the Canadian Football League. After three years of football he switched to hockey.

He played as an amateur with the Ottawa Aberdeens, the Ottawa New Edinburgh and Ottawa Royal Canadiens of the Ottawa City Senior League. He started play with the Senators, then of the NHA, in 1915. At the time, he played as a forward.

Boucher would soon switch to play as a defenceman where he would gain fame as an excellent stick handler. He would play with stars such as Eddie Gerard, Horrace Merrill, Sprague Cleghorn, Lionel Hitchman and King Clancy.

He would go on to coach in the NHL in Ottawa, Boston, St. Louis and Chicago. He would coach the Ottawa Senators of the Quebec Senior Hockey League to the Allan Cup in 1949.

He suffered from throat cancer for six years and was inducted into the Hockey Hall of Fame in 1960, just three weeks before he died. 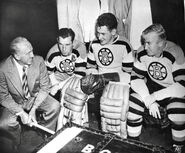