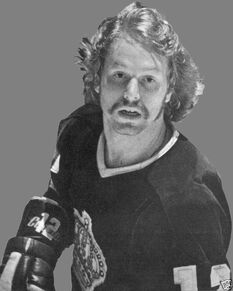 When Carr entered the NHL, he appeared to be one of the more marketable rookies the league had seen in some time. He had long, blond hair and skated like the wind. These factors led fans, the media, and even some of his own team executives to expect the world of him. The hype that surrounded Carr in his rookie year was astounding. St. Louis, which traded him to the New York Rangers after only 15 games with the Blues, talked about winning Stanley Cups with him. The Rangers called him a can't-miss superstar, and one of their own public-relations executives was quoted in The Hockey News saying as much after he scored four points in his first game with the Blueshirts at Madison Square Garden. But the truth was Carr did not have the offensive talent or flair of a Guy Lafleur or Marcel Dionne, even though the people marketing him wanted the public to believe it. He was a remarkably fast skater, but he lacked scoring touch -- evidenced by many missed nets and hit goalposts. Going to New York put more pressure on Carr, since Rangers fans were known to be tough on their own players. When Carr failed to meet expectations, they routinely gave him mock cheers. When he was benched for an entire game, they chanted "We Want Carr" throughout the third period. Ironically, by the time he was just starting to show potential with his first NHL hat trick, he suffered the first major injury of his NHL career and never fully rebounded. The folllowing year, he was nearly killed in the first of two major car accidents during his playing days. One of the people who understood to Carr's story of having been overhyped was his close friend Glenn Frey of The Eagles, who based the song "New Kid in Town" on Carr. The song includes the lyrics "Great expectations, everybody's watching you" and "Everybody loves you, so don't let them down." Overblown expectations aside, Injuries also hindered Carr, and he never panned out to be anything like the player he was billed as until his seventh year in the NHL, when he had 54 points in a 70-game stint with Pittsburgh. When expectations were raised after that season -- he signed a big contract with Atlanta -- Carr again failed to live up to them, and he was out of the league 18 months after his best season. Years later, as a result of his injuries, he had to walk with a cane and eventually required a wheelchair by the time he was in his sixties.