The Gatineau Olympiques are a major junior ice hockey team based in Gatineau, Quebec, that plays in the Quebec Major Junior Hockey League (QMJHL). The Olympiques play home games at the Robert Guertin Centre. The club, then known as the Hull Festivals, was granted membership in the QMJHL in 1973. The Olympiques have appeared in the Memorial Cup seven times, winning once in 1997. Over eighty former players and coaches have gone on to play or coach in the National Hockey League (NHL), including Martin Biron, Ales Hemsky, Luc Robitaille, Jeremy Roenick, Michael Ryder, Maxime Talbot, José Théodore, Colin White, Claude Giroux, David Krejci, Jack Adams-winning head coaches Alain Vigneault and Pat Burns and 2011 Stanley Cup-winning coach Claude Julien.

Before joining the "Q", the team was a member of the Central Junior A Hockey League, known originally as the Hull Castors but later as the Hull Hawks. Originally Hull and the CJHL were eligible to compete for the Memorial Cup, the Major Junior crown, but were relegated to Tier II Junior "A" in 1970. Three seasons before joining the QMJHL in 1973 they became the Hull Festivals, and in 1976, they became the Hull Olympiques; the team name was changed to the Gatineau Olympiques one year after the city of Hull was amalgamated into Gatineau in 2002.

On May 31, 2010, it was announced that former Olympiques coach Benoit Groulx, who had left the organization to coach the Rochester Americans would be returning to be the General Manager and Head Coach.[3]

Beginning in the 2011–12 season, the Olympiques returned to their old colours of black, silver and white. [4]

An article in the Ottawa Sun raised questions about the franchises future:

On June 2nd, (2015) the future of the franchise became unclear as the franchise may be forced to relocate after a plan to finance a new $75 million arena was shot down by the Gatineau council 15-3. At the same meeting the council voted to demolish the Robert Guertin Centre in 2018. Private financing will be needed to build a new arena. However, by early 2017 and agreement was reached for a new arena that will tentatively open for the 2020-21 season. The arena is planned to have a capacity of 4,000 and cost an estimated $79 million Canadian.[5]

Lists of National Hockey League alumni. No player from the "Hull Castors" or "Hull Hawks" went on the play in the NHL. 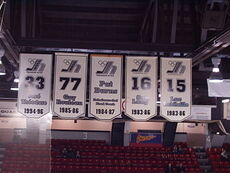 Five Olympiques players have had their numbers retired by the team. Former coach Pat Burns has also been honoured.