Born in Eveleth, Minnesota, Brimsek was one of the first great American hockey players. In the 1938–39 season, he was promoted to the Bruins following an injury to goaltender Tiny Thompson. He notched 10 shutouts that season, earning him the nickname "Mr. Zero." He won the Calder Memorial Trophy as NHL Rookie of the Year, and helped the Bruins win the Stanley Cup in 1939 season, and again in 1941.

In 1943 the Second World War interrupted Brimsek's career, and he joined the Coast Guard. He played on the Coast Guard "Cutters" hockey team and then served aboard a Coast Guard supply ship in the Pacific until the end of the war.

He resumed his career with the Bruins in 1946 and played with them until 1949, when he was sold to the Chicago Black Hawks where he played one year. He was inducted into the Hockey Hall of Fame in 1966 (the first American to earn HHOF membership) and was inducted into the United States Hockey Hall of Fame in 1973. In 1998, shortly before his death, he was ranked number 67 on List of 100 greatest hockey players by The Hockey News.

An annual award given to the top high school goaltender in the state of Minnesota is given in Brimsek's honor.

Brimsek and Shore (his broken nose from the semis still bandaged) lead the team onto the ice during the 1939 Finals. Following them are #4 Harry Frost, #5 Clapper, #7 Weiland and #8 Portland. 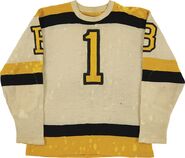 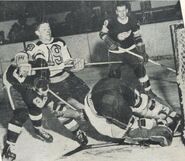 Ray Timgren scores in Game 5 of the 1949 Semi-finals.
Add a photo to this gallery

Retrieved from "https://icehockey.fandom.com/wiki/Frank_Brimsek?oldid=706199"
Community content is available under CC-BY-SA unless otherwise noted.