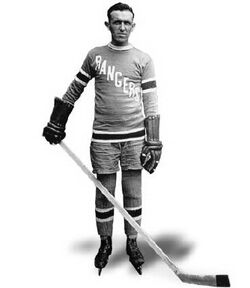 François X. Boucher (October 7, 1902 in Ottawa, Ontario, Canada – December 12, 1977 in Kemptville, Ontario, Canada) was a Canadian professional forward who played for the Ottawa Senators and New York Rangers in the National Hockey League and the Vancouver Maroons in the Pacific Coast Hockey Association.

Born in Ottawa, Ontario, Boucher centered a line with the brothers Bill and Bun Cook, and together they helped the Rangers win the Stanley Cup in 1928 and 1933, also reaching the Finals in 1932.

Frank was not only a brilliant forward, but was also one of the game's classiest. Lady Byng, wife of Viscount Byng, the Governor-General of Canada, donated a trophy to be awarded to the NHL's "most gentlemanly player." While playing for the New York Rangers, Boucher won the Lady Byng Memorial Trophy 7 times in 8 years. He was then given the trophy outright, and Lady Byng donated another trophy to the NHL.

Boucher played for the Rangers until he retired in 1937-38. The Rangers hired him to coach the New York Rovers, a minor-league team that also played at Madison Square Garden, as his apprenticeship to coaching the Rangers. When general manager Lester Patrick made the decision to retire from coaching prior to the 1939-40 season, he hired Boucher, who led his Ranger club to the last Stanley Cup. The franchise would be in existence for 68 seasons before they won a Cup without Boucher being directly involved.

After finishing first in the NHL's regular season in 1942, the Rangers lost in the Playoffs to the Toronto Maple Leafs. Soon they became victims of the military draft of World War II and went into a steep decline. In 1943-44 NHL season the New York Rangers were so bad that Boucher came out of retirement for 15 games to play where he recorded 14 points. The Rangers finished the 50 game season with only 6 wins. From 1940 to 1972 they reached the Stanley Cup Finals only once.

When Patrick retired, Frank took over as general manager. He got the Rangers into the playoffs in 1947-48 with his trade to get Buddy O'Connor and Frank Eddolls. He stepped down from coaching to concentrate on his manager's job and hired Lynn Patrick, Lester's son and an ex-teammate, to coach the Rangers, and Lynn came very close to winning the Stanley Cup in 1950, proving Boucher astute in hiring him as coach. But the Rangers were an aging team and eroded. Lynn Patrick resigned to go to Boston, and neither Neil Colville nor Bill Cook, also former teammates of Boucher's, could get the Rangers into the playoffs. Here, General John Kilpatrick, the Rangers' owner, thought about replacing Boucher, but he held off.

During the 1945-46 season, Boucher became the first coach to use two goalies regularly. Alternating Charlie Rayner and Jim Henry every game, and later, every four to six minutes, he proved the use of having two goalies.

Frank went back behind the bench in 1953-54, but couldn't get the Rangers into the playoffs. He then hired Muzz Patrick, another son of Lester and ex-teammate, to coach the team, but the Rangers won only 17 games and missed the playoffs again. So General Kilpatrick had a talk with Frank and reluctantly expressed that Frank couldn't build the Rangers into a winner, and recommended Frank resign as general manager. Frank thought it over, realizing that it was better than being fired. He then typed his resignation and handed it in to the General.

He was inducted into the Hockey Hall of Fame in 1958. In 1998, he was ranked number 61 on The Hockey News' list of the 100 Greatest Hockey Players. His uniform number 7 hangs in the rafters of Madison Square Garden, although it was retired for a later Ranger, Rod Gilbert. Although later Rangers such as Gilbert and Mark Messier have been more honored by recent fans, Boucher's status as the star of two Ranger Stanley Cups and the coach behind another marks him, except perhaps for team builder Lester Patrick, as the greatest Ranger of them all.

In 1974, Boucher wrote When the Rangers Were Young, a book about his experiences with the old-time Broadway Blueshirts, giving him one last moment of fame during his lifetime. He died of cancer on December 12, 1977 in the town of Kemptville, Ontario, near Ottawa at the age of 76.

Frank Boucher was one of five brothers who played in the NHL. His brother, George "Buck" Boucher, played on the Ottawa Senators dynasty of the 1920s, winning four Stanley Cups. Brothers Joe, Bobby and Billy also played in the league.