The 2007 Savage Cup was held in a round robin format. The winner would move on to the McKenzie Cup to face the Alberta Champion for a crack at the Allan Cup. In the first game, Fort St. John lost to the Powell River Regals 2-1. In the second game, the Flyers beat the Trail Smoke Eaters 7-4. Finishing second in the round robin, the Flyers would have to face the Smokies again, this time beating them 7-2. In the finals, the Flyers beat Powell River 6-3 to win the Savage Cup. In the McKenzie Cup, the Flyers fell 3-games-to-2 to the Bentley Generals to fall out of Allan Cup contention.

The Flyers won the 2008 Savage Cup by defeating the Powell River Regals 3-games-to-1 for the BC championship, but lost the McKenzie Cup to the Bentley Generals 3-games-to-2 in the BC/Alberta Final.

The Flyers were 2009 Savage Cup Champions as the top BC Hockey Senior "AAA" team. They lost the McKenzie Cup series to the Bentley Generals 3-games-to-1 to lose their chance at the 2009 Allan Cup.

The Flyers were granted the right to host the 2010 Allan Cup. During the 2009-10 season, the Flyers finished their North Peace Hockey League campaign with a 12-3-2-1 record - the best record in their West Division.

At the 2010 Allan Cup, Fort St. John won their two round robin games with a 7-1 over the 2009 Allan Cup champion Bentley Generals and a 6-3 win over the 2009 and 2010 Herder Memorial Trophy-winning Clarenville Caribous. In the tournament semi-final, the Flyers defeated the Patton Cup and Rathgaber Cup champion South East Prairie Thunder 7-3. In the final, the Flyers squared off with the Bentley Generals again and again won, 4-1, to win the 2010 Allan Cup. After years of disappointment at the hands of the Generals, the Flyers had finally won the Allan Cup at their expense. 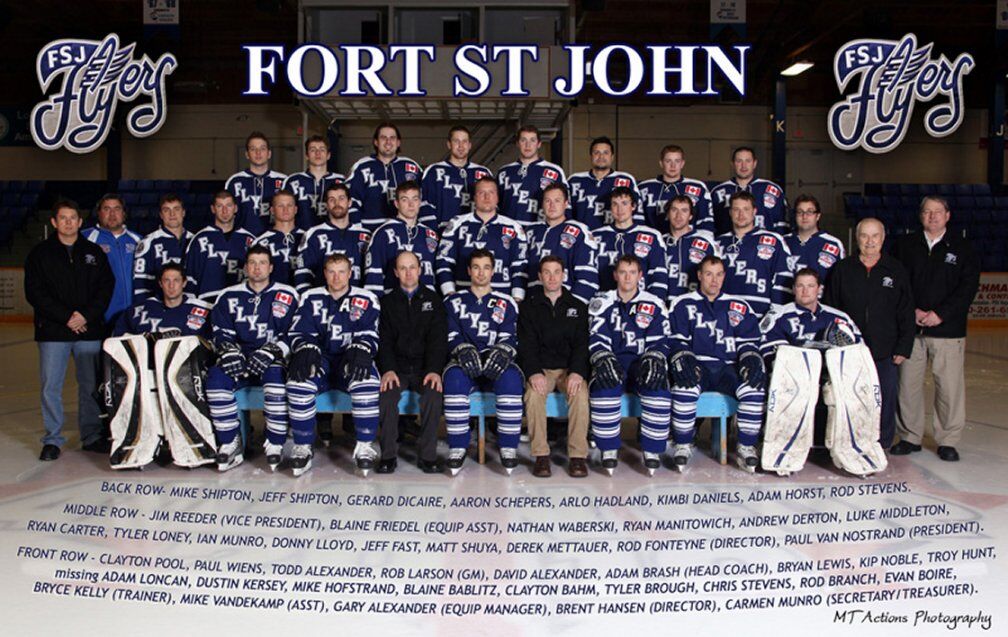