Mackell began his National Hockey League career with the Toronto Maple Leafs in 1948. The majority of his career was spent with the Boston Bruins where he would retire following the 1960 season. Mackell won two Stanley Cups with the Maple Leafs in 1949 and 1951. He is the son of former Ottawa Senator Jack MacKell.

He played junior hockey with the St. Michaels College Majors in 1946-47. Mackell won the Eddie Powers Memorial Trophy as the leading scorer and the team won the Memorial Cup that year.

He was selected to the NHL First All Star team in 1952-53. That same season, he won the Elizabeth C. Dufresne Trophy as the best Boston Bruin during home games. He centered a line composed of iron man Cal Gardner and rookie of the year, Calder Trophy winner Larry Regan in 1956-57. Along with later linemate Don McKenney, Mackell led all scorers during the 1958 Stanley Cup playoffs and set a new record of 14 assists. He was a side of the net scoring specialist, and was a Boston Bruin alternate captain for many years. Upon leaving Boston, Mackell became the playing coach of the Quebec Aces of the American Hockey League during the 1960-61 season. 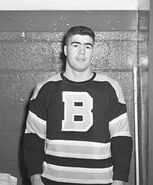 Fleming Mackell led the Bruins in scoring and was a First Team All-Star in 1952-53.