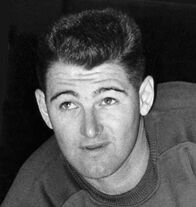 Born in Winnipeg, this right winger played his junior hockey with the Winnipeg Monarchs leading the club in 1951 to the Memorial Cup final. He played on two WHL championship teams with Brandon Regals in 1957 and Vancouver Canucks in 1958 and followed it up with two more IHL championships with St. Paul Saints in 1960 and 1961. He was also a member of the 1964 Winnipeg Maroons who were Allan Cup champions. He shared an IHL record when he scored six goals and recorded five assists in a game on January 17, 1962. In a professional career of 700 games Elliot Chorley totalled 240 goals, 310 assists and 550 points.

Retrieved from "https://icehockey.fandom.com/wiki/Elliot_Chorley?oldid=567739"
Community content is available under CC-BY-SA unless otherwise noted.