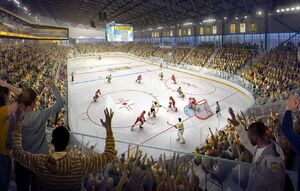 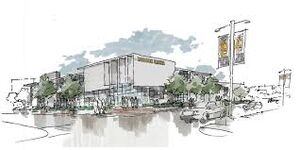 The Edward J Robson Arena is an indoor arena located on the campus of Colorado College in Colorado Springs, Colorado.  The proposed arena has 3,407 seats for ice hockey.  The arena was originally planned on being the practice facility for the Colorado College Tigers hockey teams.  They previously played in the Broadmoor World Arena.  This would be the team's first on campus home since the program started in 1938.  The arena is believed to cost about $39 million (later raised to $52 million).  The school will be responsible for the operations, scheduling, and maintenance of the arena.  The arena has the potential to be used of national and international events as the United States Olympic Committee is also based out of Colorado Springs.  The proposal for the original arena was announced by school officials in 2015 with the original proposal dating back to 2008 when the college updated its Long Range Development Plan.[1]  They report having over $28 million in donations already raised for the project. [2][3]

Due to the relatively small campus population and historical attendance figures at team games, the arena is the second smallest capacity rink in the conference ahead of the Goggin Ice Center at Kent State University.