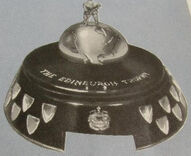 The Edinburgh Trophy was a trophy given to the winners of a series played between the champions of the Western Hockey League and the Quebec Hockey League. It was contested in the years 1954 to 1957. The trophy was donated by the Prince Philip, Duke of Edinburgh in March 1954. It was described as a "silver figure of a hockey player mounted on top of a silver globe with a map of North America raised on it." The globe was attached to a black ebony base with the coat of arms of the Dominion of Canada. On the sides of the base, there were small plaques to inscribe the winning team's name.

all series were best-of-nine format.