Edward Joseph "Eddie" Johnston (born November 24, 1935 in Montreal, Quebec) is a former player and coach in the National Hockey League.

Johnston grew up in an anglophone neighborhood in Montreal and was often called "E.J.", a nickname that is still often used today. He became interested in ice hockey as a youth and became a goaltender.

He began his hockey career as a teenager in 1953 playing for the hometown Montreal Junior Royals of the Quebec Junior Hockey League. After a six year minor pro league career, principally as the property of the Montreal Canadiens, Johnston was claimed by the Boston Bruins. They called him up in the 1962–63 NHL season. In his second season, he became notable for being the last NHL goaltender to play every minute of every game during the regular season. However, the Bruins were a mediocre team in his first five seasons, finishing out of the playoffs every year and generally in last place.

This changed after expansion in 1967, when after acquiring Bobby Orr and Phil Esposito, the resurgent Bruins became a powerhouse that went on to win Stanley Cups in 1970 and 1972. Capably backing up lead goaltender Gerry Cheevers, Johnston played well enough to be named as a backup to Team Canada for the Summit Series in 1972, although he played only in exhibition matches. The following season, after defections to the new World Hockey Association left Johnston as the number one goaltender for the Bruins once more, He did not play nearly so well, and was traded after the season to the Toronto Maple Leafs. Toronto in its turn dealt Johnston to the St. Louis Blues, for whom he would be a credible backup for three seasons. His final season, 1978, he played poorly in twelve games for St. Louis before being sold to the Chicago Black Hawks, for whom he played in four matches to end his long goaltending career.

Johnston played in 591 NHL games, compiling a record of 236 wins, 256 losses and 87 ties (many of his losses came during his early years). He had 32 shutouts, with a goals against average of 3.24. At the time of his retirement, he was ninth all time in games played by a goaltender, sixteenth all time in goaltending wins and sixth in losses.

Johnston went into coaching the next year, leading the expansion New Brunswick Hawks - Chicago's new American Hockey League farm team - to a 41–29–10 record for second place in its division.

He was promoted to be head coach of the Black Hawks during the 1979–80 NHL season, compiling a 34–27–19 record. The following year, he became head coach of the Pittsburgh Penguins, holding that position until 1983 after having been appointed general manager of the Pens. He held the GM post at Pittsburgh for five years. Johnston oversaw Pittsburgh's 1984 NHL Entry Draft picks in which the Pens picked Mario Lemieux.

After Johnston left the Penguins for the first time in 1988, he served as the general manager of the Hartford Whalers from 1989 until he was released in 1992.

He was once again hired as head coach of the Penguins in 1993 and guided the Pens until 1997, when he was asked to step down after the Penguins failed to win a third Stanley Cup under his guidance. He spent the next nine years as the Assistant General Manager of the Pens before being named Senior Adviser for Hockey Operations in July 2006, his 23rd year with the Pittsburgh Penguins organization.

EJ left the coaching reins as the Penguins' all-time leader in coaching wins (232), losses (224), and games coached (516). He was however passed as the Penguins all-time wins leader by Dan Bylsma in 2014. 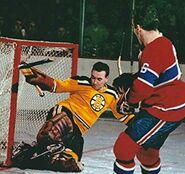 Johnston with Team Canada, September 1972.
Add a photo to this gallery
Retrieved from "https://icehockey.fandom.com/wiki/Eddie_Johnston?oldid=680186"
Community content is available under CC-BY-SA unless otherwise noted.