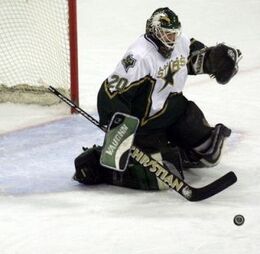 Belfour, a former MJHL star, who went on to success in the National Hockey League as one of the most dominate goalies of his era. Winning a Calder Trophy as NHL's rookie of the year, a two time Vezina Trophy winner as NHL's top goalie, and a three time NHL All-Star. And in 1999, as a member of the Dallas Stars, a Stanley Cup.

Retrieved from "https://icehockey.fandom.com/wiki/Ed_Belfour_High_Performance_Award?oldid=573397"
Community content is available under CC-BY-SA unless otherwise noted.