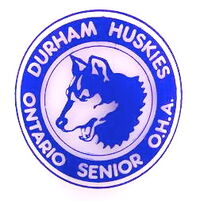 The creation of the Durham Hockey Club happened in a year that seems to be unknown to most historians. Although it is known that a paramount moment in the Hockey Club's history happened in 1908. 1908 marked the building of Durham's first indoor arena. The new 200" by 75" arena was built by a Mr. Brown on the corner of George and Kincardine in the heart of the town.

Early teams played in the Ontario Hockey Association's Senior and Junior leagues, as well as the late-season Northern Hockey League which operated at the Senior and Junior level as well. It was common that all these entries would have a few players playing for all of them.

Some of the earliest statistics from these leagues come from the 1919-20 Northern Hockey League season. The Senior Hockey Club was in Group 2 of the NorHL with Southampton, Mildmay, Hanover, Walkerton, and Mount Forest. The Durham HC had three recorded wins and losses in that season. The Southampton team won the league. The Junior team had a better season, although the regular season statistics are missing. In the league semi-final, Durham HC defeated Mount Forest 10-6 in two games (5-3, 5-3) and met Listowel-Palmerston in the final. In game one, the L-P Combines beat Durham 8-6, but the Durham HC won game two 4-2 to level the series. The league ordered the series to be replayed, which Listowel-Palmerston won both games (4-3, 3-1).

In the 1920-21 season, the Durham HC competed in the OHA Intermediate League. As members of Group 14, the HC was grouped in with Owen Sound, Markdale, and Wiarton. Markdale and Wiarton dominated their counterparts, while Owen Sound and Durham both finished with one win on the six game season.

The 1926-27 season had the Durham HC win Group 18B against Paisley and Chesley. Despite winning 18B, they had to defeated the 18A winner to move on to provincials. Listowel was the winner of 18A, and defeated Durham 11-6 in two games.

In 1928-29, the Durham HC was in the Group 16 loop of the OHA Intermediate League. In with Markdale and Flesherton, Durham easily dominated with a 4-0 record and outscoring their opponents 31-6. Despite this, in the first round of provincials playdowns, the Durham HC lost 12-8 in two games to neighbouring Walkerton.

The next season, 1929-30, the Durham HC played a seven game season in Group 12B with five wins, a loss, and a tie. Due to their record, they had to play a tie breaker against Owen Sound to move on -- they defeated Owen Sound 2-0. Durham then faced off against the Group 12A champion, Walkerton, but were defeated 7-1 and 2-0.

A year later, Durham found themselves in a reformed Group 16 with Walkerton and Owen Sound. Durham only managed one win in four games in the 1930-31 season and were eliminated from the playoffs.

It would take until the 1934-35 season before the Durham Hockey Club really jumped onto the Ontario Hockey Association radar.

The 1935-36 season proved to be a historic one for the Durham Hockey Club. They came back after losing the OHA semi-final in 1934-35 with something to prove. The Durham Hockey Club defeated Arthur 24-8 in two games to win the Group 14 championship. In the first round of the OHA playdowns, the HC again drew Owen Sound. Owen Sound won game one of the two game set by a score of 5-3. Durham would have to win the second game by at least three goals to move on, not only did they make the spread, they blew Owen Sound out by a score of 7-1 to make the OHA quarter-final. In the quarter-final, Durham drew the team that put them out the season before, Clinton. Game one resulted in a 1-1 tie and game two ended tied at a score of 2-2. The OHA ordered the two teams to play a winner-take-all game three in which Durham took by a score of 6-2 to gain a measure of revenge over a tough Clinton squad. In the OHA semi-final, Durham found themselves against an Acton squad that was looking to avenge their loss from 1934-35. Game one was a blowout victory for Acton, sticking it to Durham with a 7-2 win. Durham would have to not only win, but beat Acton by six goals in game two if they were to make the OHA final. Durham dug deep and found themselves in game two, crushing Acton 7-1 and taking the two game series 9-8. During this magnificent playoff run, a reporter attempted to dub the team "The Hornets", but the name did not stick. The team made the trip East to play in the OHA final, but were shocked to find out that the other semi-final was not even close to being finished. A Durham-native named Eddie Allen, an editor for the Mail and Empire's sports department, secured Maple Leaf Gardens in Toronto to be the practice spot for the Durham Hockey Club until the Whitby/Niagara-on-the-Lake semi-final was concluded. Allen's gift to the Durham HC proved pivotal, as the team was able to stay in game shape to face Whitby once they were victorious. Durham found itself up against the defending provincial champion in the final and after a roller-coaster ride of a playoff already were ready for them. Durham shocked Whitby in game one, holding on for a 3-2 victory. The momentum carried to game two where Durham dominated Whitby with a 6-3 win to defeat them 2-games-to-none and clinch the OHA Intermediate B championship.

Not much is known about the Durham Hockey Club in the 1940's. In 1949, an attempt was made to dub the team the "Durham Phantoms". The name was not accepted. 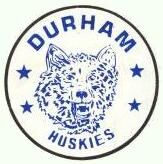 In 1972 the Western Intermediate C Hockey League became the Western Senior B Hockey League. In 1973 that league was renamed the Continental Senior B Hockey League. The Huskies were league and provincial champions in 1974. The Huskies were renamed the Durham-Walkerton Huskies from 1974 until 1976 due to the Old Durham Arena being condemned. They spilt their time in nearby Walkerton. At the same time their league was promoted to Senior A and gained Allan Cup eligibility. In 1976, the Durham-Walkerton Huskies won the Continental League by defeating the Stratford Perths and faced the Barrie Flyers in the Ontario Allan Cup final and National Quarter-final. The Flyers took Game 1 5-4 and Game 2 9-5. The Huskies kept it close but fell in Game 3 4-2 and Game 4 6-4 to end an amazing season for the towns of Durham and Walkerton.

In 1980, the Continental League became the OHA Senior A Hockey League. The Huskies only played 2 seasons in what was the new OHA Senior super-league. Like all OHA-run Senior Leagues, the league folded (only a few seasons after the Huskies left).

In the summer of 1982, the Durham Huskies announced that they were leaving the Senior "A" loop. In a rare admission, the team President Steve Morris informed the Toronto Star that the team was only staying competitive by the necessity to pay its players. This admission was rare as the OHA often denied that its teams were anything but fully amateur. Due to the increase in semi-professional hockey, teams had taken to paying players to play Senior hockey. Durham's coffers had run thin as the more Toronto-area teams had more sponsorship to draw from, and were forced to walk away. The League folded in 1987.

The Huskies spent a dismal 1982-83 season in the Major Intermediate A Hockey League. They finished last and the league was merged into the Senior A league in the summer of 1983. The Huskies permanently dropped to the Senior B level.

In 1989, the Huskies finished the 1988-89 season with the top record in the Central Senior B Hockey League. Due to their record they were allowed to enter into the Ontario Hardy Cup championships. They were victorious and played off against the Port-aux-Basques Mariners in the Eastern Final to determine the East seed to the Hardy Cup. The Huskies fell in 2 straight games.

(*) denotes that the results of the final 6 games of the 1983-84 season are currently missing. 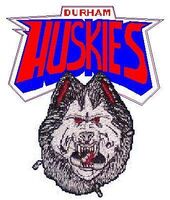 The Durham Huskies were resurrected in 1996 as member of the Metro Junior A Hockey League. The effort to bring a junior team to Durham, although, began soon after the folding of the original Durham Huskies in 1992.

Only a year or two later, flyers were posted at the Durham Community Centre inquiring about people who may be interested in bringing junior hockey to a town known for its senior hockey teams. Soon rumours were flying about a new Durham Huskies franchise in town. Initially, the Huskies were thought to have potential to join the OHA Development League with rival centre Seaforth. The Seaforth Centenaires were a staple of Junior "D" hockey from the early 1970s. Sadly, with Seaforth and the Mitchell Hawks being the closest teams in the league, the Huskies had no chance of joining. Junior "C" seemed like a perfect fit for the team. The Western Junior C Hockey League had always been in the area and rivalry between a Huskies club and the Hanover Barons and Mount Forest Patriots would be something for the ages, but both teams objected to the expansion. Junior "B" seemed like a less likely, but viable alternative. An hour North of the Listowel Cyclones, Guelph Dominators, Elmira Sugar Kings, Kitchener Dutchmen, and Waterloo Siskins seemed like a great opportunity for the team, but being only 44 kilometers South of the Owen Sound Greys left them open to objection. The Ontario Provincial Junior A Hockey League did not seem like much of an option at the time, but with teams like the Collingwood Blues and Couchiching Terriers within driving distance it seemed like an option. But, the Huskies were granted expansion in the last place anyone would think of, the Metro Junior A Hockey League. The renegade Metro league was on a part-time basis with Hockey Canada, but the league had no objection to coming to the Town of Durham. The neighbouring competition was the Shelburne Wolves and the Caledon Canadians.

At the end of the 2000-01 season, the Huskies asked the OHA for a one year leave from the association with intentions of joining Junior "C" in 2002. The next summer, the Huskies applied to join the Western Junior C Hockey League for the second time and were turned down. Apparently, the effort was made again a year later with the same result. The Huskies have not iced a team since.

Retrieved from "https://icehockey.fandom.com/wiki/Durham_Huskies?oldid=621372"
Community content is available under CC-BY-SA unless otherwise noted.