The Drayton Valley Thunder were awarded as an expansion franchise in 1998, and began play in the South Division for the 1998-99 season. One year after finishing sixth in the South, ahead of only their expansion cousins the Crowsnest Pass Timberwolves, the Thunder rocketed up the standings, winning the South division in only their second season. Further expansion shifted the Thunder into the North Division in 2000-01, where they won another division title.

In 2002, only four years after being awarded the team, the Thunder captured the Rogers Wireless Cup as AJHL Champions. The Thunder fell to the Chilliwack Chiefs of the BCHL in the Doyle Cup series. 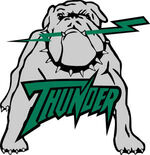