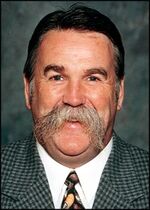 Note: Abbotsford was affiliated with New Westminster. In 1978, Sauter coached the last 24 regular season games for New Westminster, while Head Coach Punch McLean served a 25 game suspension. The Bruins, at the time, were in 4th place, 8 points out of a playoff spot. Sauter lead them to a 17-7 finish and into the playoffs.

Retrieved from "https://icehockey.fandom.com/wiki/Doug_Sauter?oldid=568573"
Community content is available under CC-BY-SA unless otherwise noted.