Ice Hockey Wiki
Register
Don't have an account?
Sign In
Advertisement
in: Born in 1938, Dead in 2005, Boston Bruins players,
and 4 more

Donald Robert James Keenan (August 8, 1938 — November 29, 2005) was a Canadian professional ice hockey goaltender who played in one National Hockey League game for the Boston Bruins during the 1958–59 NHL season. 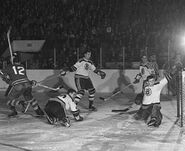