Ice Hockey Wiki
Register
Don't have an account?
Sign In
Advertisement
in: Born in 1907, Dead in 1978, Boston Bruins coaches,
and 10 more

Clapper was given the nickname "Dit" at an early age when he would lisp his name "Vic." It came out "Dit." The name stuck.

As a member of the Boston Bruins, he became the first player to play in the National Hockey League for twenty seasons. He was a great player both as a forward and defenceman, being named to All-Star squads at both right wing and defenceman.

A lifelong member of the Bruins, in 1947 the team retired his number 5 sweater and the Hall of Fame selection committee waived the customary three-year waiting period, and immediately inducted him into the Hockey Hall of Fame upon the night of his retirement. His used jersey from that night's game was donated to the Hall of Fame by Clapper himself during an on-ice presentation that night announcing his retirement and induction into the Hall. The jersey is currently on display in the International Hockey Hall of Fame's museum in Kingston, Ontario. Until he was named as coach, he had served as captain for longer than any NHL player until Ray Bourque and Steve Yzerman.

Clapper coached the Bruins for two seasons as a player-coach and for two more seasons after his retirement. He became the first player in NHL history to play for 20 seasons, and the last active player that played during the 1920s.

1930-31 would be the last year for the "Dynamite Line" of Clapper, Cooney Weiland and Dutch Gainor. The Bruins have a long history of community work, January 24, 1939. 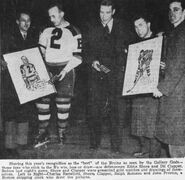 Frank Brimsek and Eddie Shore (his broken nose from the Semis still bandaged) lead the team onto the ice during the 1939 Stanley Cup Finals. Following them are #4 Harry Frost, #5 Dit Clapper, #7 Cooney Weiland and #8 Jack Portland.

Bill Cowley, Clapper and Jack Crawford with the Cup in Boston, 1941.