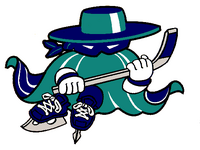 The Dayton Ice Bandits were a Colonial Hockey League team that played from 1996-1997 in Dayton, Ohio.

The franchise was originally the St. Thomas Wildcats, one of the original franchises in the Colonial Hockey League. The team eventually moved from St. Thomas, Ontario to neighboring London, Ontario, which was a market 10 times bigger than St. Thomas. Unfortunately, the team still struggled to draw fans, and the franchise suspended operations. The team sat out the 1995-1996 season, but relocated to Dayton, Ohio for the 1996-1997 season. Unfortunately, the club still did not draw well so they suspended operations after only one season in Dayton. The franchise then moved again to become the Mohawk Valley Prowlers.

In their only season they finished with a 13-53-8-34 record which was good for fith and last place in the Western division. They were out of the playoffs,