To his Edmonton Oilers teammates he was known as Semenk or Sammy; to his National Hockey League rivals, he was that man to be feared, a chiseled-faced, stone-cold bodyguard who made sure no one so much as cast an evil eye at Wayne Gretzky. And if someone dared hit No. 99; gloves would fly and punches would be thrown so as to make absolutely certain the message had been delivered: You mess with the Great One, you answer to the Great Protector, Dave Semenko.

That was Semenko’s role for eight of his NHL seasons with the Oilers as they rose to Stanley Cup champions. For a lineup that included not just Gretzky, but the likes of Jari Kurri, Glenn Anderson, Paul Coffey, and others, Semenko was the 6-foot-3, 215-pound adjustor who earned Edmonton’s skilled players a little more time and space on the ice to make their passes and score their goals. For his unrelenting commitment to their well-being, the Oilers, and their fans, adored Dave Semenko.

Semenko was born in Winnipeg on July 12, 1957. He played major junior hockey with the Brandon Wheat Kings of the Western Hockey League and had a monster season in 1976-77 when he scored 27 goals and added 33 assists in 61 games, all while being tagged with 265 minutes in penalties, a little more than 4 hours of lost ice time. His abilities caught the attention of the Oilers, who were then members of the fledgling World Hockey Association, a rag-tag assemblage of good teams and wretched teams that would ultimately see four franchises merge with the NHL. The Oilers would be one of those four.

One of Dave Semenko’s most famous fights took place far from the ice. On June 12, 1983, he and Muhammad Ali, then 41, staged an exhibition match in Edmonton with proceeds going to a local charity.

Like so many of the great Oilers of that era, Semenko was traded away. He went to the Hartford Whalers then finished his playing career with the Toronto Maple Leafs in 1987-88. His career statistics with Edmonton, Hartford and Toronto included 65 goals and 88 assists for 153 points in 575 games. His penalty-minute count was 1,175. Unofficial sources say he had 70 fights during his time as hockey’s pre-eminent enforcer.

Semenko found his way back to Edmonton, first as a colour commentator on Oilers radio broadcasts and then an assistant coach for one season before joining the scouting staff.

Dave Semenko’s legacy was cemented by his work as Wayne Gretzky’s protector. But he brought more to the Oilers than being the biggest, meanest dog in the fight. It was his competitiveness that helped make the Oilers Stanley Cup champions in 1984 and 1985. It was a trait even his greatest foes respected. 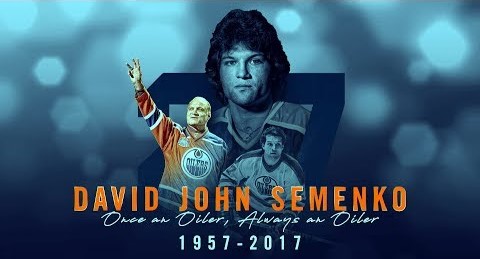