Danny Gallivan (April 11, 1917 - February 24, 1993) was a Canadian radio and television broadcaster and sportscaster.

Born in Sydney, Nova Scotia, Gallivan began his broadcast career at a local radio station in Antigonish, Nova Scotia while attending St. Francis Xavier University. He taught high school algebra and Latin in Antigonish following graduation and took a stint in the Canadian Army] before returning to continue his broadcasting career.

In 1946, Gallivan moved to a radio station in Halifax where he became sports director. He was spotted by a CBC producer of Hockey Night in Canada while in Montreal to broadcast a junior hockey playoff between Halifax and Montreal and was asked to fill in for a sick announcer in 1950. In 1952, Gallivan began a 32-year stint with Hockey Night in Canada, mostly calling games involving the Montreal Canadiens, before retiring after the 1983–1984 season. Immediately after Bill Hewitt was forced to retire in 1982, Gallivan motored (for a time) to Toronto to announce mid-week Maple Leaf games - he announced the night when Rick Vaive scored his 50th goal of the season, a first in Maple Leaf history. Gallivan did play-by-play for over 1,800 Canadiens games on both television and radio in his career.

Gallivan was known for his colourful descriptions of action on the ice. Hard shots became "cannonading drives"; saves were "scintillating" or "larcenous" rather than merely spectacular; and, after a save, pucks tended to get caught in a goalie's "paraphernalia" (goalie equipment). If the goaltender made a fantastic or impossible save, he would refer to it as a "hair raising save" or that the goalie "kicked out his pad in rapier-like fashion" to foil a "glorious scoring opportunity". He would use words such as "anemic" to describe an ineffective offense or powerplay. He also coined phrases like "nowhere near the net", when a shot would go wide, comment that "there has not been a multitudinous amount of shots" to describe a game with a "dire dearth" of shots on net, would mention that a defender was "wasting valuable seconds in the penalty" when they were ragging the puck, and would almost always announce, "and the penalty has expired!" at the end of a penalty. The ultimate Gallivanism was a word he coined: the "spinarama," which described a player evading a check or when a player would deke a defender with a sudden 180- or 360-degree turn. Its chief practitioner was Serge Savard, so the move was also known as "The Savardian Spinarama".

When a university professor wrote to Gallivan protesting that there was no such word as "cannonading," Gallivan wrote back and replied, "There is now." The Canadian Oxford Dictionary includes an entry for "spinarama."

On October 9, 1970, he had the distinction of announcing the Vancouver Canucks' first-ever game in the NHL, a 3–1 loss to the Los Angeles Kings on CKNW radio.

Gallivan was active in retirement, working with several charities, and was the recipient of several television/broadcast industry awards. He made a cameo appearance in the 1975 Canadian feature film The Million Dollar Hockey Puck. Gallivan also had a cameo as the voice of sportcaster Ferlin Fielddigger in the 1981 animated TV special, The Raccoons On Ice. 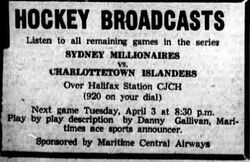 1951 Alexander Cup Radio Ad
Add a photo to this gallery

Retrieved from "https://icehockey.fandom.com/wiki/Danny_Gallivan?oldid=457436"
Community content is available under CC-BY-SA unless otherwise noted.