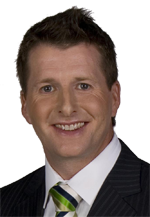 After graduating from the University of Ottawa with a degree in Communications in 1992, Murphy attended BCIT’s Broadcast Journalism program where he graduated in 1995. He quickly got his start in television when he joined Global's Sports Page in Vancouver where he worked as a writer/reporter/producer from 1995 to 1999. Murphy was then hired as a reporter by Sportsnet in November 1999 and hosted Vancouver Grizzlies NBA broadcasts on Sportsnet and VTV during the 2000–01 season.

Murphy currently provides on-site reporting, interviews and promotional spots as part of Sportsnet's Vancouver Canucks coverage, as well as during the Canucks pay-per-view games. Murphy also serves as host/emcee of the annual Canucks "superskills" competition, and he is generally provided with close access to the team whose players nickname him "Murph".

Retrieved from "https://icehockey.fandom.com/wiki/Dan_Murphy?oldid=247216"
Community content is available under CC-BY-SA unless otherwise noted.