The Cool Insuring Arena formerly the Glens Falls Civic Center is a 4,806-seat multi-purpose arena located in downtown Glens Falls, New York that currently serves as the home of the Adirondack Thunder of the ECHL. 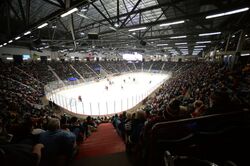 Built in 1979, it was originally the home of the Adirondack Red Wings, AHL affiliate of the Detroit Red Wings. The Red Wings had success in their nearly two-decade stint in Glens Falls, winning three division championships, and four Calder Cup trophies. The Red Wings eventually left in 1999, and were replaced by the Adirondack IceHawks of the UHL, later renamed the Adirondack Frostbite. Following their departure in 2006, the then named Glens Falls Civic Center sat without a professional hockey team for three years.

For the 2007–08 and 2008–09 AHL seasons, the nearby Albany River Rats played four home games in Glens Falls in order to gauge the community's interest in whether an American Hockey League franchise could relocate to Glens Falls. City government officials and arena management were looking into the possibility of acquiring a franchise to play in the Civic Center. In April 2008, the building became one of the management properties of Global Spectrum for the city of Glens Falls, New York.  The Philadelphia Phantoms relocated to Glens Falls to become the Adirondack Phantoms in 2009. They played a total of five seasons in the Civic Center, and did not make the AHL playoffs once in their time in Glens Falls.

Following the Phantoms departure after the 2013-14 season, the Calgary Flames announced they were relocating the Abbotsford Heat franchise to Glens Falls.[1] Then on January 29, 2015, after less than one full season in Glens Falls, the Calgary Flames announced that they would be moving their AHL affiliate in Glens Falls to Stockton, California as one of five charter members of the AHL's new Pacific Division. The next day, the Flames announced that the ECHL's Stockton Thunder (who they had purchased the day before) would move to Glens Falls in what was essentially a "market swap". That team was renamed the Adirondack Thunder, and began play the following fall.,

The Adirondack Thunder played their first game on Saturday, October 24th, 2015 against the Manchester Monarchs. They made the playoffs during their first season and were the first Adirondack hockey team to bring playoff hockey to Glens Falls in ten years. They defeated the favored Manchester Monarchs four-games-to-one in the first round, becoming the first team in Glens Falls to win a playoff series since the Adirondack Red Wings in 1994. They faced the South Carolina Stingrays in the second round, which they lost in seven games.The arena was renamed the Cool Insuring Arena on July 12, 2017 when a sponsorship deal was reached with arena ownership.