Ice Hockey Wiki
Register
Don't have an account?
Sign In
Advertisement
in: Born in 1905, Dead in 1984, Lester Patrick Trophy recipients,
and 2 more

Born in Fleming, Saskatchewan, Campbell attended high school at the Strathcona Collegiate Institute. He graduated from the University of Alberta with a degree in law and arts in 1924 and was a Rhodes Scholar at Oxford University, where he played for the Oxford University Ice Hockey Club.

Campbell worked as a referee in the NHL from 1933 until 1939. He officiated some historic games, such as the game in 1937 when the great Howie Morenz's career was ended when he broke his leg, an injury that eventually led to his death. Campbell even refereed a rough playoff game between the Montreal Maroons and the Boston Bruins in which Dit Clapper used his stick on a player. Angry at Clapper's actions, he called Clapper a profane name, which brought a powerful punch from the hardrock defenceman that knocked Campbell to the ice. Campbell, aware of his provocative action, then submitted a very lenient report on Clapper, and NHL president Frank Calder gave Clapper only a fine as a result.

Campbell made a controversial call in 1939 when refereeing a game involving the Toronto Maple Leafs when defenceman Red Horner was struck with a stick and Campbell doled out only a minor penalty, even though Horner was bleeding. Leafs owner Conn Smythe called for Campbell not to be rehired, and the league agreed.

Calder decided to let Campbell work in his office after his career as a referee, and it was becoming evident that the League president was grooming a successor. But World War II broke out and Campbell enlisted in the Canadian Armed Forces. He rose to the rank of lieutenant colonel, and after the war, was appointed Queen's Counsel, and was one of the prosecutors at one of several trial courts of leading Nazis who were put on trial for crimes against humanity. It has been widely reported that Campbell participated in the Nuremberg Trials, but he said that was untrue in a Sports Illustrated article published in the late 1960s.

Meanwhile, Calder had died, and with Campbell overseas, the NHL named Red Dutton president. But Dutton did not want the job and when Campbell finally came back to Canada in 1946, Dutton resigned and Campbell accepted the presidency. He was certainly qualified for the position, with his experience in law and in hockey. One of his first acts of authority was in 1948, when he expelled players Billy Taylor and Don Gallinger from the NHL for betting on games.

As NHL President, Campbell is perhaps best remembered for suspending Montreal Canadiens superstar Maurice Richard for the remaining three games of the 1955 regular season and for the entirety of the playoffs. His action came as a result of Richard's punching of linesman Cliff Thompson during a March 13 game with the Boston Bruins . On March 17, Campbell attended a game at the Montreal Forum between the Canadiens and the Detroit Red Wings. Throughout the first period he was taunted and pelted with debris by outraged Montreal fans, who saw him as a prime example of the city's English-Canadian elite oppressing the French-Canadian majority. After a tear gas bomb was released in the arena, Campbell exited the building, the game was forfeited to the Red Wings, and the Forum was evacuated. What ensued was a full-fledged riot in which 60 people were arrested and $500,000 in damage was done. .

Campbell was elected to the Hockey Hall of Fame in 1966. He was instrumental in the 1967 expansion, which doubled the league in size. He kept the league alive when the World Hockey Association raided its talent in the 1970s, and often worked 18 hours a day in his office.

In 1976, he was charged with bribing an airline executive. He was convicted, but the NHL paid his fine and he served no time because of his age. Campbell was a sick man by the time he retired as NHL president in 1977. He spent the last years of his life plagued with respiratory ailments, and died on June 24, 1984. 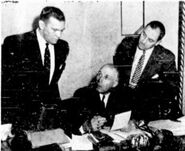 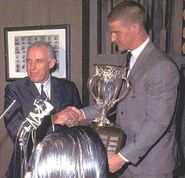 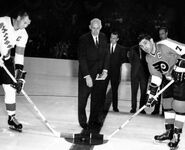 Clarence Campbell presents trophies to Phil Esposito and Bobby Orr for the 1968-69 season.

John Bucyk accepts the Stanley Cup from Clarence Campbell, May 10, 1970.