Ivan Wilfred 'Ching' Johnson (December 7, 1897, - June 16, 1979) was a Canadian professional defenceman who played for the New York Rangers and New York Americans in the National Hockey League. A native of Winnipeg, Manitoba, Johnson was regarded as one of the hardest bodycheckers to ever play the game.

Ching's NHL career lasted 12 years. He joined the New York Rangers during the 1926–27 NHL season, spending 11 seasons with the team. He was an important member of the Rangers teams that won Stanley Cups in 1928 and 1933. His last season in the NHL was with the New York Americans during the 1937–38 NHL season. During his NHL career he scored 43 goals, had 50 assists, and served 969 penalty minutes.

After he left the NHL, his hockey days were not yet over. Ching took on the dual role of player-head coach of the Minneapolis Millers for 2 seasons and afterwards served as the head coach of the Washington Lions. His playing career ended with a stint in 1943-1944 with the Hollywood Wolves of the PCHL.

After his hockey career was over, Ching became a general contractor in the construction business and later settled permanently in Maryland.

When, in 1978, it was announced that he had cancer, thousands of letters and cards poured into him. Ching Johnson died in Silver Spring, Maryland, on June 16 1979, at the age of 81.

He was inducted into the Hockey Hall of Fame as a Player in 1958. 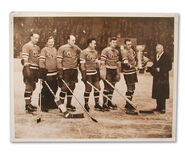 Earl Robertson clears the puck while Ching Johnson guards the net against the Bruins, December 12, 1937.
Add a photo to this gallery

Retrieved from "https://icehockey.fandom.com/wiki/Ching_Johnson?oldid=668191"
Community content is available under CC-BY-SA unless otherwise noted.