The Chatham Maroons are a Canadian junior ice hockey team based in Chatham, Ontario, Canada. They play in the Western division of the Greater Ontario Junior Hockey League. 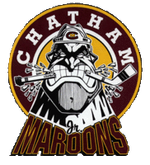 At the 2004 NHL Entry Draft, Ryan Jones was drafted as a Maroon in the fourth round by the Minnesota Wild, 111th overall. He attended and played for Miami University. After his collegiate career, Minnesota traded Jones to the Nashville Predators.

The Maroons participated in the 2006 Sutherland Cup round robin, but lost out to the Niagara Falls Canucks and the Cambridge Winterhawks with a 1-3 record.

The Maroons began the 2013-14 season slowly and resorted to trading for four of their territorial rival's, the Lambton Shores Predators, top players (Kyle Brothers, Adam Arsenault, Tanner Ferguson, and Connor Annett) in a series of high-profile trades for players and cash.[1] The Maroons also released 2012-13 starting all-star goaltender Darien Ekblad and replaced him with the Cambridge Winter Hawks' goaltender Jacob Keogh while picking up NOJHL Jr. A forward Kyle Rowe.[2] Ekblad would get picked up by the Junior C Essex 73's and tend them to a Great Lakes League championship.[3] Right before the trade deadline, the Maroons picked up forward Charlie Izaguirre from the fizzling Port Colborne Pirates for cash and prospects.[4] On January 28, 2014, the Ontario Hockey Association ruled against the Maroons for exceeding their limit on import players. General Manager Bill Szekesy was suspended for an entire season and the franchise fined $4500. In addition, during the 2014-15 season, the Maroons will be limited to 30 cards instead of the usual 35.[5] On February 19, 2014, the OHA announced that despite a Maroons' appeal, the punishment will stand. In addition, two wins were stripped from their record (versus Leamington Flyers and St. Marys Lincolns).[6] Despite the trades and controversies, the Maroons would sweep the Western Conference quarter-final against the Strathroy Rockets and semi-final against the LaSalle Vipers, before being quashed 4-games-to-1 in the conference final by the Leamington Flyers.[7]