This article is about the senior and intermediate team. For the junior team, please see the Chatham Maroons (junior). 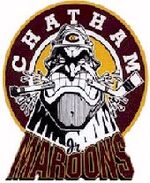 Although teams from Chatham played in the Ontario Hockey Association since the early 1900's, the first appearance of the Chatham Maroons was in 1932-33.

Because of the distance from most other teams in Ontario plus the opporunities available in the nearby United States, the Maroons played in both areas. They played regular seasons and playoffs in the Michigan-Ontario League (MOHL) and playoffs in the Ontario Hockey Association (OHA) Senior B series. In 1936-37 they played in the Intermediate A.

The Maroons were resurrected in 1949 and joined the International Hockey League (IHL) and also registered for the Ontario Hockey Association (OHA) Senior series. They played as such for three seasons.

They were declared co-champions of the United States in 1949-50.

An ambitious expansion by the IHL took the league to larger cities in the United States and Chatham withdrew. The Maroons joined the OHA Senior A league.

The Maroons lost the league final in 1958-59 after a great first place finish. The next season they finished a poor third but went all the way in the playoffs. They won the 1959-60 Allan Cup Final.

They would play three more seasons in the OHA. In 1963-64 they joined the IHL because the league had lost several teams to the new Central Professional Hockey League. This was a swan song for the senior team and it disappeared until 1978.

The junior team would take over.

http://hockeydb.com for the Michigan-Ontario standings

Retrieved from "https://icehockey.fandom.com/wiki/Chatham_Maroons?oldid=446445"
Community content is available under CC-BY-SA unless otherwise noted.