The Charlotte Checkers are a minor-league professional ice hockey team based in Charlotte, North Carolina, USA. They are members of the West Division of the Western Conference of the American Hockey League (AHL), and are the AHL affiliate of the Carolina Hurricanes of the National Hockey League (NHL). The Checkers play their home games at Bojangles' Coliseum. The current organization is the third team by this name; it succeeded a Checkers franchise which played in the ECHL from 1993 until the end of the 2009–10 ECHL season. The original Checkers team played in the city from 1956 to 1977, originally in the Eastern Hockey League and then in the Southern Hockey League. The franchise is one of five teams to directly replace and share a name with a predecessor from a lower-tier league; the others are the Bakersfield Condors, Ontario Reign, Rockford IceHogs, and San Diego Gulls.

The franchise was originally the Capital District Islanders from 1990–1993. They then became the Albany River Rats from 1993–2010, until the River Rats were sold to MAK Hockey, LLC, led by Michael Kahn.[1] The new ownership relocated the team to Charlotte for the 2010–11 season, renaming the franchise the "Charlotte Checkers", and relinquished the ECHL franchise to the league. The Checkers' first home game was played on October 15, 2010, in front of 12,512 spectators which set an attendance record for a hockey game in Charlotte. On February 26, 2011, the attendance record was broken as 12,933 fans watched the Charlotte Checkers defeat the Connecticut Whale 1-0.[2][3] Almost a year later, on February 25, 2012, the attendance record was broken yet again as 13,102 fans watched the Checkers fall to the Oklahoma City Barons, 3-2. On April 11, 2015, the attendance record was broken a third time as 13,219 fans watched one of the few remaining hockey games at Time Warner Cable Arena, a 2-0 to the Rockford Icehogs.

On late 2014, the Checkers announced they would return in the following season to the Bojangles' Coliseum, stadium of the previous Checkers teams until 2005.[4] As Kahn detailed, the move would reconnect with said team legacy, and having a dedicated arena allowed for "greater control over every aspect of our business, including scheduling, amenities, game presentation and sponsorship inventory." To make sure the Coliseum is up to AHL standards, the Charlotte City Council arranged to provide $16 million to fund renovations.[5][6] 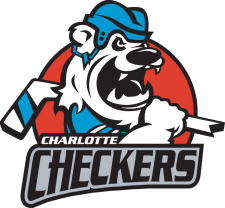