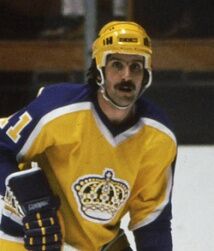 named to 1980 NHL All-Star Game but did not play due to knee injury. ... became only the second player in NHL history to score 50 goals in a season without having any hat tricks. ... became second Los Angeles player to score 50 goals. ... set Los Angeles record with 21 power play goals. ... also set Los Angeles single-season records for points, goals and assists by a left wing. ... scored 50 of his goals in 51 games, the fastest in L.A. history. ... that year also scored at least one goal in each of 13 straight games to become the first player to threaten Punch Broadbent's record of 16 that dated back over five decades. ... named to the NHL's First All-Star Team and also named L.A. Most Inspirational Player. ... started the next year by being named NHL Player of Week for first week of 1980-81 season and NHL Player of month for October 1980. ... played in NHL All-Star game. ... duplicated his 56-goal output but suffered a devastating compound fracture of his leg toward the end of the season. ... still garnered a spot on the NHL First All-Star Team for the second year running. ... set Los Angeles single-season records for points and assists by a left wing. ... became first left wing in NHL history to score 100 points in consecutive seasons. ... voted Los Angeles Most Popular Player. ... spent the off-season and the early stages of the 1981-82 schedule recuperating from his injury. ... still recorded 51 assists, setting a Los Angeles single-season assist record and scoring 29 goals playing all 80 regular season games. ... played for Team Canada at the World Championship. ... rebounded by leading L.A. in goals with 44 in 1983-84. ... played in NHL All-Star game and was named Los Angeles MVP. ... did not report to Los Angeles' training camp as scheduled on Sept. 17, 1984. ... locked in a contract dispute, Simmer demanded that general manager Rogie Vachon trade him. ... five games into the 1984-85 schedule, he 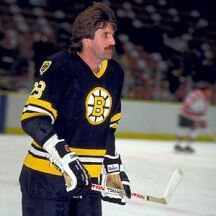 was traded to the Boston Bruins, where he led the Bruins in goals with 33 and averaged a point per game. ... named NHL Player of Week for first week of 1985-86 season. ... experienced injury troubles in 1985-86, but still scored 36 goals in 55 games. ... his remarkable comeback was acknowledged winning the Bill Masterton Trophy. ... spent his last NHL season, with the Pittsburgh Penguins in 1987-88. ... played the following year as a pro in Germany. ... took a year away from hockey before joining the San Diego Gulls of the International Hockey League for the 1990-91 season as player-assistant coach. ... played one game for the squad in 1991-92 before retiring. ... was the last California Golden Seal and the last NHL Cleveland Baron active in professional hockey. ... Anaheim's first radio color commentator and remained in that position through 1995-96 season. ... Phoenix TV color commentator in the 1996-97 season and remained in that position through 2003-04 season. ... Ex-husband of Playboy 1981 Playmate of Year Terri Welles. ...