Hodge was "an undersized battler of a goalie at 5–6 and 150 pounds." As a junior, he won a Memorial Cup in 1950 as a back-up with the Montreal Junior Canadiens.

Hodge's first NHL game occurred in 1954 with Montreal. But because teams in that era only carried one goalie, and Montreal had perhaps the best goalie of the era in Jacques Plante, Hodge was only used in emergency situations. During this time, he played for the Canadiens' minor pro farm teams.

When Plante was traded in 1963 for Gump Worsley, Hodge got his chance to play full-time when Worsley was injured early in the 1963-64 NHL season. That season, Hodge won the Vezina Trophy for being the goaltender of the team allowing the fewest number of goals during the regular season, After that season, Hodge split the goaltending duties with Worlsey and spilt another Vezina Trophy in 1965-66. Hodge's name appears on the Stanley Cup six times, although he only actually played in one of those finals. He also played 1 game in the finals in 1955, but lost to Detroit.

In 1967, the league doubled in size to 12 teams. Hodge was picked up in the 1967 NHL Expansion Draft by Oakland. Hodge won a Western Hockey League title in 1969 with the Vancouver Canucks. Hodge was an expansion pick again when the Canucks entered the NHL in 1970. He posted a winning record while sharing netminding duties with George Gardner and Dunc Wilson. He retired in 1971 after being unable to come to terms with General Manager Bud Poile.

Hodge sold real estate for a decade until Winnipeg Jets GM John Ferguson recruited him for the team's scout in Western Canada.

Hodge is currently an amateur scout for the NHL's Tampa Bay Lightning after two decades with the Pittsburgh Penguins. He received Stanley Cup rings with Pittsburgh in 1991 and 1992. He primarily scouts the Vancouver Giants and Chilliwack Bruins of the Western Hockey League and the Lower Mainland clubs in the British Columbia Hockey League. 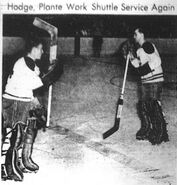 Willie O'Ree's first goal, January 1, 1961 against Montreal's Charlie Hodge was the winner as the Bruins edged the Habs 3-2.