The Central Hockey League (CHL) was a mid-level professional hockey league, owned by Global Entertainment Corporation. Its final champions were the Allen Americans.

This incarnation Central Hockey League was created in 1992 as a centrally owned league, owned by Ray Miron and Bill Levins. The league was operated by Ray and Monte Miron and funded by Chicago businessman and minor league sports entrepreneur Horn Chen.  The league came to an end on October 7, 2014 when the Board of Governors of the ECHL voted to accept the CHL's remaining seven members as expansion teams in the ECHL.

The Central Hockey League (CHL) was revived in 1992 by Bill Levins and Ray Miron under the idea of central ownership of both the league and the teams. Both men were from hockey backgrounds. Miron had been general manager of what is now the New Jersey Devils and had briefly been president of the previous Central Hockey League in 1976.

In the inaugural 1992–93 season the league had six teams, including the Oklahoma City Blazers, the Tulsa Oilers, the Wichita Thunder, the Memphis RiverKings, the Dallas Freeze and the Fort Worth Fire. With the move of the RiverKings to the SPHL, the Thunder and the Oilers are the last of the league's original teams still extant.

After several experiments in expansion and a long battle for players and markets with the Western Professional Hockey League (WPHL), the CHL merged with the WPHL in 2001.

The CHL commissioner is currently Duane Lewis, who succeeded Brad Treliving on an interim basis after Treliving took a position with the NHL's Phoenix Coyotes following the 2006-2007 season. Treliving co-founded the WPHL in 1996, and after the 2001 merger, served with the CHL for seven years.[1] Lewis was named the permanent commissioner in June 2008.[2]

On June 1, 2010 the league announced that it would merge with the International Hockey League.[3] Originally touted as a "merger," the effect was for the IHL's Bloomington, Dayton, Fort Wayne and Quad City franchises to join the CHL; the IHL quietly folded thereafter.

The CHL and the ECHL websites announced on October 7, 2014 that the CHL's seven teams were accepted as expansion teams in the ECHL. On October 9th the CHL created a Central Division which was made up of the former CHL members.

(date which all members were accepted into the ECHL) 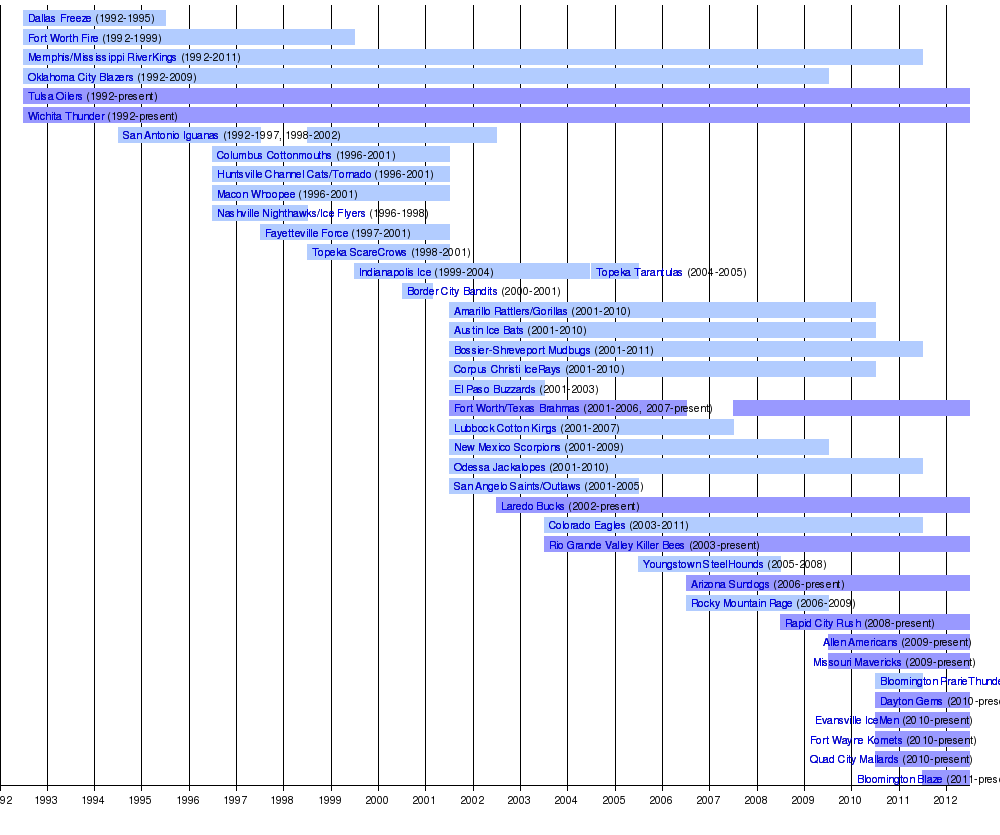