The Central Collegiate Hockey Association (CCHA) is a college athletic conference that began competing in the NCAA's Division I as a hockey-only conference in the 2021–22 season. The first incarnation of the conference, which the current CCHA recognizes as part of its history, existed from 1971 to 2013. Half of its members are located in the state of Michigan, with additional members in Minnesota and Ohio. It has also had teams located in Alaska, Illinois, Indiana, Missouri and Nebraska during its existence.

The CCHA was disbanded after the 2012–13 season as the result of a conference realignment stemming from the Big Ten Conference (of which three CCHA schools; Michigan, Michigan State, and Ohio State, were primary members) choosing to sponsor Division I ice hockey beginning in the 2013–14 season. The remaining CCHA members received invitations to other conferences, such as the newly formed National Collegiate Hockey Conference (NCHC), Hockey East, and the Western Collegiate Hockey Association (WCHA), which itself had been depleted by the Big Ten and NCHC. The conference's last game before its hiatus was the final of the 2013 CCHA Men's Ice Hockey Tournament at Joe Louis Arena in Detroit, where Notre Dame beat Michigan 3–1 to win the Mason Cup championship.

On February 18, 2020, seven schools who had applied to leave the WCHA announced they would form a new CCHA for the 2021–22 season. The initial member schools were Bemidji State, Bowling Green (who had retained the rights to the CCHA name), Ferris State, Lake Superior State, Michigan Tech, Minnesota State and Northern Michigan. On July 29, 2020, it was announced that an eighth school, the University of St. Thomas, would join the conference after previously being an NCAA Division III program. [1]

The CCHA began in 1971 as an NCAA conference comprised by Bowling Green, Ohio, Ohio State and Saint Louis.[2] After adding Lake Superior State for year two, both Ohio State and Ohio withdrew from the conference, leaving the CCHA with a scant 3 members. Despite the trouble, the three teams rode out the rough patch and the league began to grow with the addition of Western Michigan and the return of Ohio State.[3]

Up until 1976 the NCAA had only offered bids to the tournament from teams in either ECAC Hockey or the WCHA. Because those were the only two Division I conferences for most years there was no controversy but, after the CCHA had proved to be more than just a flash in the pan, the tournament had to change. Beginning with the 1977 Championship the NCAA allowed itself the freedom to add up to four additional teams to the tournament with the understanding that the CCHA tournament champion would receive one of the additional bids. Bowling Green won the first tournament game for the conference but it wasn't until Northern Michigan reached the championship game in 1980 that the league began to gain acceptance.

1981 saw a major shift in college ice hockey with four teams from the WCHA defecting to the CCHA. The move was done as a way to reduce travel costs as well as provide the new team with a better chance at making the NCAA Tournament (many of the CCHA teams were still seen as lesser programs). Michigan State made the tournament in its first three season of CCHA play but it was founding member Bowling Green that won the conference's first national championship in 1984.[4]

Bill Beagan served as commissioner of the CCHA from 1985 to 1998.[5] He implemented a pre-season training camp for referees, despite the officials going on strike in protest.[6] He developed a working relationship with the NHL to develop future officials in collegiate hockey.[7]

He sought to have CCHA games televised as a game-of-the-week,[5] and signed the first national television contract for colleges in the United States.[8] He brought in cable television partners which included the Pro Am Sports System and Fox Sports Net.[7] He introduced instant replay to the CCHA in 1993, to be used at its league championships, and arranged for the CCHA Men's Ice Hockey Tournament finals to be played at Joe Louis Arena.[9] He was credited with coining the phrase, "Road to the Joe", in reference to end-of-year tournament culminating at the Joe Louis Arena.[6]

Prior to Beagan's arrival, the CCHA had not been a profitable association. After 10 years as commissioner, the league had made $4 million.[8][5] Profits were shared with the schools, which were reinvested into hockey programs and new arenas.[5] On-ice results improved during his tenure, and CCHA teams won six NCAA Division I Men's Ice Hockey Tournament championships.[8][5] In addition, Beagan convinced the University of Notre Dame to resurrect its hockey program in 1992.[5]

Michigan State won their first title as a CCHA team two years after Bowling Green and in 1988 Lake Superior State won their first NCAA championship. The Lakers and Spartans both remained near the top of the NCAA ranks into the 1990s but it was Michigan who took over as the conference pacesetter. The Wolverines began a streak of 22 consecutive tournament appearances in 1991 and won 2 national titles in that time. While the conference and most of its teams were stable throughout the early 21st century the CCHA suffered a mortal blow at the end of the decade.

Pennsylvania State University announced on September 17, 2010 the transition of its men's and women's American Collegiate Hockey Association (ACHA) programs to NCAA Division I status in 2012.[10] Just over a month earlier, then-commissioner Tom Anastos publicly stated that the CCHA would strongly consider adding Penn State as the conference's 12th member.[11] Instead, the league was left to deal with the imminent departures of Michigan, Michigan State and Ohio State when the Big Ten Conference disclosed on March 21, 2011 its intention to establish a men's ice hockey circuit to begin play in the 2013–14 season, as the conference now had enough hockey teams to earn an automatic bid in the NCAA tournament for its champion.[12] Joining the existing CCHA members were the University of Minnesota and the University of Wisconsin from the WCHA, as well as Penn State.[12]

The next school slated to leave the CCHA in 2013 was Miami University which became a charter member of the NCHC on July 15, 2011.[13] Western Michigan accepted an invitation to join the new league just over two months later on September 22.[14]

The demise of the CCHA was further accelerated when five members decided to move to the WCHA following the 2012–13 campaign. Northern Michigan University, returning to the WCHA after leaving in 1997, was the first to make the announcement on July 20,[15] followed by Alaska, Ferris State and Lake Superior State on August 26[16] and Bowling Green on October 4.[17]

Notre Dame accepted an invitation to the Hockey East Association in a press conference on October 5, 2011.[18]

On June 28, 2019 seven schools began the process of withdrawing from the WCHA, with the intent of forming a new conference for the 2021–22 season. The seven schools cited a more compact geographic footprint as one reason for the move, with Alabama-Huntsville, Alaska and Alaska–Anchorage notably absent.[19] On February 18, 2020 these seven schools announced they would begin competing in a new CCHA in 2021–22.[20]

Don Lucia, a former head coach at Alaska, Colorado College, and Minnesota, was named as commissioner of the new CCHA on June 17, 2020.[21] A new league logo was introduced shortly thereafter.[22] 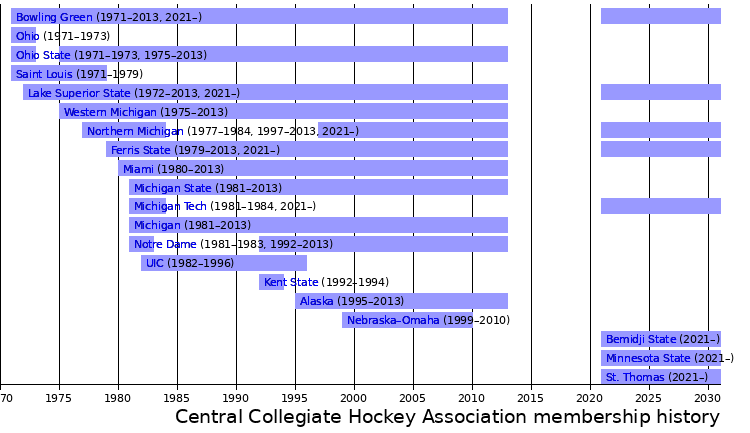 At the conclusion of each regular season schedule the coaches of each CCHA team voted which players they choose to be on the three All-Conference Teams:[24] first team, second team and rookie team. Additionally they vote to award up to 9 of the 12 individual trophies to an eligible player at the same time (depending upon the year). The CCHA also awards a Perani Cup, a Humanitarian Award, which are awarded rather than voted upon, and a Most Valuable Player in Tournament which is voted on at the conclusion of the conference tournament. None of the individual awards conferred by the CCHA have been given for the entire existence of the conference. Only the Tournament MVP was awarded in CCHA's inaugural season, but the award was discontinued thereafter until 1982.[25][26][27]