The franchise was granted to the Sorel Eperviers (Black Hawks) for the 1969–70 season. They moved from Sorel to Verdun in 1977 to become the Verdun Eperviers. In 1979 they played in both Sorel and Verdun before moving back to Sorel for the next season. In 1981 they moved to Granby to become the Granby Bisons, and in 1995 they changed their names to the Granby Prédateurs. In 1996, the Prédateurs won the Memorial Cup. In 1997 they moved to Sydney to become the Cape Breton Screaming Eagles. Prior to the Eagles' arrival, Sydney played host to the AHL's Cape Breton Oilers from 1988 to 1996.

The Screaming Eagles' very first captain was Daniel Payette under coach Dany Dubé. They had very poor success in their first few seasons and often had difficulty earning respect around the league, with some players not wanting to come to Cape Breton or complaining while they were there. As enforcers were more common in the league at the time, the Screaming Eagles often made up for lack of skill by having an abundance of fighters.

The turn of the new millennium brought some hope to the Screaming Eagles franchise as new head coach and general manager Pascal Vincent was able to slowly turn things around. Star goaltender Marc-Andre Fleury is often credited as the one who landed the Screaming Eagles on the map and prevented them from folding. Along with star players Dominic Noel, Stuart MacRae, and Stephen Dixon, the Screaming Eagles reached the league's conference final in 2002, only to lose in 5 games to Acadie-Bathurst Titan. Fleury's #29 went on to be retired by the Screaming Eagles in 2008.

Vincent made a bold move and stacked the Screaming Eagles lineup with many NHL prospects for the 2003–04 season in hopes of bringing a league title to Cape Breton. Most of the players came from a notorious "boomerang" trade with the Halifax Mooseheads. After the Screaming Eagles won 49 games and captured a division title, Fleury returned from the Pittsburgh Penguins, leading many to think the team would be unstoppable in the playoffs. The Screaming Eagles lost in the second round to the Chicoutimi Saguenéens.

Despite the embarrassment, President Greg Lynch opted not to fire Vincent. At the 2004 QMJHL draft, the Screaming Eagles chose James Sheppard with the 1st overall pick. In 2006–07, along with star players Luc Bourdon, Ondrej Pavelec, and Oskars Bartulis, Sheppard led the Screaming Eagles to the league semifinals, only to lose in 7 games to the Val-d'Or Foreurs.

The 2007–08 season saw 16 year-old goaltender Olivier Roy rise to prominence. The Screaming Eagles finished 4th in their division and won their first round playoff series despite having a roster that normally dressed at least ten rookies. Vincent went on to be named the 2008 QMJHL Coach of the Year. However, following the end of the season, Vincent violated the terms of his contract and became the head coach and general manager of the Montreal Junior Hockey Club.

Following Vincent's departure, Assistant Coach Mario Durocher took over the role of head coach and general manager. In a bid to host the Memorial Cup in 2012, Durocher in 2010 added former NHL players Mike McPhee and Guy Chouinard, former NHL coach Pierre Creamer and Michel Boucher to the hockey staff in consulting roles. Durocher was relieved of his duties effective immediately on April 12, 2011, after a lackluster season in which the team finished 16th in the League and last in the Atlantic Division with just 41 points.

The team's then-Head Coach Ron Choules replaced Durocher as GM in April 2011, though the team failed to improve on the ice. After a poor start to the 2012–13 season, Choules himself was fired as head coach and GM on December 3, 2012, with former Val-d'Or Head Coach Marc-André Dumont announced as his replacement. The 2012–13 season was a poor one for the Screaming Eagles, as they failed to reach the playoffs for the first time in franchise history. At season's end, Assistant Coach Jean-François David was fired, with no replacement immediately announced.

The team would be renamed the Cape Breton Eagles during the summer of 2019. 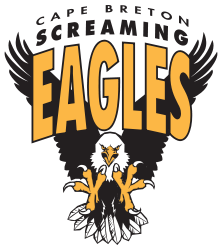