Candian Tire Centre is a 19,153 capacity arena, home to the NHL's Ottawa Senators. The arena is located in Kanata, a district of Ottawa, Ontario. Opened as The Palladium in January 1996, it was known as the Corel Centre from February 1996 until February 2006. From 2006-2013, it was called the Scotiabank Place. Besides ice hockey, the arena holds other events, such as rock concerts, figure skating shows and other entertainment. It is also home to the Ottawa Sports Hall of Fame, several restaurants, a fitness complex and several businesses. Including standing room, the arena has a capacity of 20,500 for sports events. It has resemblance to The Palace of Auburn Hills.

As part of its bid to land a NHL franchise for Ottawa, Terrace Corporation unveiled the original proposal for the arena development at a press conference in September 1989. The proposal included a hotel and 20,500 seat arena, named The Palladium on 100 acres, surrounded by a 500 acres mini-city, named "West Terrace." The site itself, 600 acres of farmland, on the western border of Kanata, had been acquired in May 1989 by Terrace. The large site had previously been a possible location for a new home for the Central Canada Exhibition, but the Exhibition's option on the property had expired.

The site was farmland and required a rezoning to proceed with construction. The then-City of Kanata supported the rezoning, but the provincial government and some local residents opposed the rezoning, forcing public hearings into the proposal by the Ontario Municipal Board. Rezoning approval was granted by the Board on August 28, 1991, with conditions. The conditions imposed by the board included a scaling down of the arena to 18,500 seats, a moratorium on development outside the initial 100 acres arena site, and that the cost of the highway interchange with highway 417 be paid by Terrace. A ground-breaking ceremony was held in June 1992 but actual construction did not start until July 7, 1994.

The two year period was used seeking financing for the site and interchange by Terrace Corporation. The corporation received a $6 million grant from the federal government, but needed to borrow to pay for the rest of the costs of construction. On August 17, 1993, Bruce Firestone, the Senators owner, was replaced by Rod Bryden, a former high tech tycoon, who assumed control of Terrace Corporation. Bryden managed to borrow enough to pay for the $188 million project through a consortium of U.S. banks and Ogden Entertainment, but could not find financing for the highway interchange. Only after the provincial government provided a loan guarantee for the highway interchange financing did construction proceed.

Actual construction took 18 months, finishing in January 1996. The Palladium opened on January 15, 1996 with a concert by Canadian rocker Bryan Adams. The first NHL game took place two days later, with the Montreal Canadiens defeating the Senators 3-0. On February 17, 1996 the name 'Palladium' was changed to the 'Corel Centre' when Corel Corporation, an Ottawa software company, signed a 10-year deal for the naming rights.

When mortgage holder Covanta Energy (the former Ogden Entertainment) went into receivership in 2001, Terrace was expected to pay off the whole debt. The ownership was not able to refinance the arena, eventually leading to Terrace itself declaring bankruptcy in 2003. However, on August 26 2003, billionaire businessman Eugene Melnyk finalized the purchase of the Senators and the arena. The arena and club became solely owned by Melnyk through a new company, Capital Sports Properties.

In 2004, the ownership applied to expand its seating. The City of Ottawa amended its by-laws in December 2004 and in 2005, the venue was allowed to increase its seating capacity to 19,153 and total attendance to 20,500 when including standing room.

Also in 2005, the arena became home to the Ottawa Sports Hall of Fame, with a display on the second-floor concourse. Information of over 200 inductees is detailed on individual plaques. The exhibit display had previously been located at the Ottawa Civic Centre since 1967.

Although widely acknowledged as a well-designed arena, it has been criticized in the years since construction for being difficult to reach. It is located in the far west-end of Ottawa, in the former city of Kanata, which puts it at a fair distance from some parts of the urban areas, especially from the east-end of Ottawa or from the Outaouais region. Difficulties are compounded by frequent traffic congestion at game time along the Queensway (417) highway, Palladium Drive and Terry Fox Drive. Another problem is the isolation of the arena from many restaurants and bars, which makes it difficult for celebrations to continue naturally after the game as in many other more centrally located arenas.

From when known as Scotiabank Place 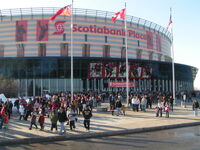