The Campbell River Storm are a Junior "B" ice hockey team based in Campbell River, British Columbia, Canada. They are members of the North Division of the Vancouver Island Junior Hockey League (VIJHL). The Storm play their home games at Rod Brind'Amour Arena. Lee Stone has been the coach since 2013. They are captained by forward Kobe Oishi.

In 2015, the Storm became the only team (to date in VIJHL history), to win the VIJHL Championship, The BC Provincial Championship and the Keystone Cup as Western Canada's Junior B champions, all in the same season.[1] 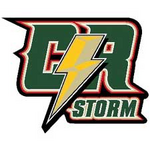 The Storm play in the VIJHL, a Junior B hockey league on Vancouver Island consisting of 9 teams. The team began play in the 1997-98 season and went on to capture the Patterson Memorial Trophy as playoff champions in its first season.[2] They would win the trophy 6 more times in a row, then reach the finals the following 2 seasons, losing in six games to the Victoria Cougars in 2005, then again in 6 games to the Kerry Park Islanders in 2006.

They have played in 8 Cyclone Taylor Cup tournaments, winning it twice in 1999 and 2015 and silver in 2017. In 2004 they hosted it, losing to the Richmond Sockeyes of the Pacific International Junior Hockey League in the finals. Three times they have played in the Keystone Cup, capturing bronze in 1999 in Thunder Bay, Ontario, taking silver as hosts in 2006, and winning gold in 2015 in Cold Lake, Alberta. They play out of the Strathcona Gardens Complex in Campbell River, in Rod Brind'Amour Arena. They were owned and coached by Jim Revenberg, who was selected in the 7th round of the 1989 NHL Entry Draft by the Vancouver Canucks,.[3] Linda and Kevin Spooner bought the team in May, 2011.[4]

Western Canadian Jr. B Championships(Northern Ontario to British Columbia)
Six teams in round robin play. 1st vs 2nd for gold/silver & 3rd vs. 4th for bronze.