The Calgary Stampeders were a senior and then a minor pro team.

After a terrible 7th place finish in their first season, the Stampeders went on a tear. They finished first in 8 out of their next 12 senior seasons. They played in 5 Allan Cup finals, winning in 1945-46.

They won the Western Hockey League (minor pro) title in 1953-54 and then went on to win the Edinburgh Trophy.

Stampeders who played in the NHL 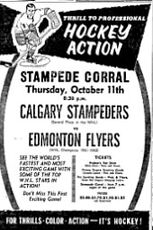 Ad from their last pro season, 1962-63.
Community content is available under CC-BY-SA unless otherwise noted.
Advertisement