The Byng of Vimy Trophy was awarded annualy to the player in the Quebec Senior Hockey League who best combined clean play with value to his team.

Like the similar Lady Byng Trophy of the National Hockey League, it was donated by Lady Byng, wife of the Governor-General of Canada. This trophy was donated in 1942.

It replaced the Kenneth Stewart Trophy.

The trophy followed the league as it changed to the Quebec Senior Hockey League (Major) in 1950 and the professional Quebec Hockey League in 1953. It was retired when the Quebec League folded in 1959. 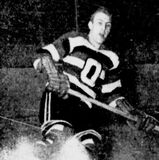 1958-59 Gerry Desaulniers
Add a photo to this gallery
Retrieved from "https://icehockey.fandom.com/wiki/Byng_of_Vimy_Trophy?oldid=399770"
Community content is available under CC-BY-SA unless otherwise noted.