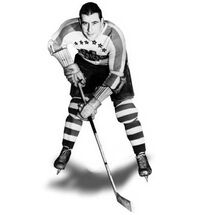 Jackson played for the Toronto Marlboros along with future teammate Charlie Conacher, and joined the Leafs in 1929, just a few days after Conacher. He immediately made a splash in his first game, when he sent Montreal Canadiens star Howie Morenz to the ice with a hard check. A dazed Morenz told the young Jackson, "You'll do."

Shortly afterward, Jackson was knocked out of the lineup with an injury. Trainer Tim Daly asked him to carry his teammates' sticks, as was the tradition for rookies at the time. Jackson refused, saying "I'm not here to carry sticks. I'm here to play hockey." Daly called him "a fresh busher"--a term for someone who had just been called up from the minors. The nickname stuck.

Midway through his first season, Maple Leafs co-owner/manager/coach Conn Smythe put Jackson and Conacher on a line with another young forward, Joe Primeau. This created one of the greatest forward lines in NHL history, the Kid Line. They were an important part of the great Maple Leaf team of the 1930's.

After Jackson's scoring output dropped off in 1939, the Leafs traded him to the New York Americans for Sweeney Schriner. He played there for two years, and played his last three years with the Boston Bruins. Late in his career with Boston, he saw some time on defence due to the decimation of NHL rosters during World War II.

He was inducted into the Hockey Hall of Fame in 1971, which led directly to Smythe resigning as the Hall's president. Smythe believed Jackson did not warrant admission to the Hall due to his character. In 1998, he was ranked number 55 on The Hockey News' list of the 100 Greatest Hockey Players.

Busher Jackson is interred at Park Lawn Cemetery in Toronto.[1] 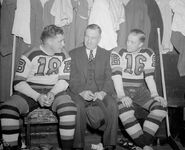 Arguably the most interesting NHL video of the 1930's. 1933 Stanley Cup Finals Game 4 highlights of all periods of play including the Cup winning goal by Bill Cook in overtime. Foster Hewitt provides the play-by-play and interviews Conn Smythe, Dick Irvin, Busher Jackson, Charlie Conacher, King Clancy and Red Horner in the dressing room during the first intermission. Horner played with a broken right hand and shows Hewitt his cast and how he was able to grip his stick. Hewitt then interviews the Rangers in their dressing room in the second intermission.

Retrieved from "https://icehockey.fandom.com/wiki/Busher_Jackson?oldid=675302"
Community content is available under CC-BY-SA unless otherwise noted.