The Buffalo Thunder are a junior ice hockey team from Irving, New York.

The team played out of the Hyde Park Ice Pavilion in Niagara Falls, New York for the 2018-19 season. The team shares the same ownership as the Niagara Falls PowerHawks of the North American 3 Hockey League. 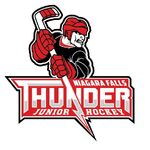 The team would relocate to the SNI Cataraugus Community Center in Irving, New York for the 2019-20 season.

Retrieved from "https://icehockey.fandom.com/wiki/Buffalo_Thunder?oldid=682089"
Community content is available under CC-BY-SA unless otherwise noted.