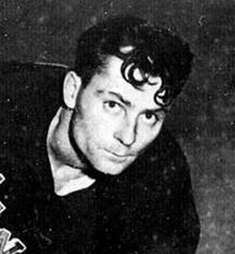 Started his career as a goalie at the age of 9, because he could not skate. … his uncle Jack Bend, hockey guru of Poplar Point, moulded him into a outstanding defenseman. … in 1929-30 Poplar Point went to the provincial midget final. … and in 1930-31 won the provincial juvenile championship. … in 1932-33 led the WJrHL "B" Division in scoring. … half way thru 1933-34, was suspended by the CAHA, one year, for a tampered birth certificate. … turned pro, joining the Vancouver Lions of the North West Hockey League. … Lions converted him into a left winger. … in 1934-35 the Lions won the league championship. … in 1935-36 led the league in goals. … promoted to IAHL the following year and again led the league in goals. … earned a 3 game call up to the NHL Rangers. … in 1937-38 stuck with the Rangers. … Lester Patrick put the left-handed shooter on right wing. … the move paid off, Hextall led the NHL in goals in 1939-40 and 1940-41 and in points in 1941-42. … selected to the NHL First All-Star Team in each of those 3 seasons and the Second All-Star Team in 1942-43. … mainly played on the Rangers' top line with Phil Watson and Lynn Patrick. ... scored perhaps the biggest goal in New York Rangers history on April 13, 1940, in overtime, in game six of the Stanley Cup finals in Toronto. ... at the 2:07 mark of the fourth period, Hextall beat legendary goaltender Turk Broda to give New York a 3-2 victory in the game and a 4-2 series win to claim the Stanley Cup. ... also durable, appeared in 340 consecutive games for the Rangers. ... missed entire 1944-45 season after being refused permission to enter USA by War Mobilization Command. ... 3 games into the 1945-46 season was hospitalized due to a liver ailment. … his doctors said he'd never play hockey again and even had some doubt he'd live. … overcame doctors expectations, appearing in all 60 games for the Rangers in 1946-47. ... his comeback was the hockey news of the year. ... retired professionally after the 1948-49 season. ... coached the St. Boniface Canadiens to the Memorial Cup final. ... was on four Manitoba Intermediate Championship teams. ... inducted into the Hockey Hall of Fame in 1969. ... battled circulation problems in his lower legs following his retirement, an ailment that ultimately led to the amputation of both legs below the knees in the fall of 1978. … just over a year later, the Winnipeg Jets of the National Hockey League honoured Manitoba’s Hockey Hall of Famers. … and before the largest crowd in Manitoba hockey history and a national television audience, Hextall stubbornly refused to be taken out to center ice in a wheelchair and walked out proudly on crutches as thousands stood, cheered, and some wept openly with admiration for this magnificent old warrior. … inducted into the Manitoba Sports Hall of Fame in 1984. ... inducted into the Manitoba Hockey Hall of Fame in 1985. ... selected to Manitoba's all-century Second All-Star Team in 2000. ...